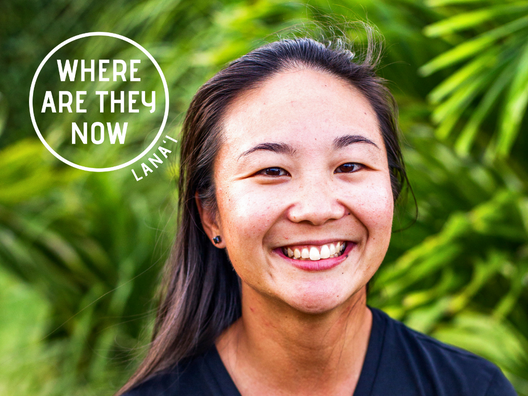 The summer after graduating from LHES in 2004, Justine Ige decided to move to Oahu to pursue an education at Kapiolani Community College (KCC). She attended KCC for a few years while working at the computer lab with her two cousins before taking a short break from school. Justine then worked at a homeless preschool in Waianae for five years before returning to KCC to complete her education and earn a certification in the Exercise & Sports Science (ESS) program. After graduating from KCC, she interned as a personal trainer where she learned more in-depth knowledge about the human anatomy and how exercise affects the body. Justine’s journey eventually led her to where she is now – a manager at Duke’s Waikiki in the Bar Server Department.

Learning on the Job

Justine was initially referred to Duke’s Waikiki in 2013 by a great Lanai friend’s father, who worked at the school on Lanai. She started at Duke’s logo stand selling t-shirts and branded items before changing roles to a server in the restaurant. A structured person by nature, one of the largest adjustments she had to make was going from a set weekly work schedule to a flexible one. After just four years, Justine’s work ethic and people skills then landed her the manager position of the bar service department, and she admits that transition was a challenge.

“[As a manager], there are so many things to do. You’re making sure all the staff is there, that operations are running smoothly and making sure you’re giving staff what they need to succeed for the day,” said Justine. “Whether it’s information on a product or what’s happening in the restaurant, there are all these different things that get thrown at you each day.”

Although Justine received manager training, a lot of skills were learned on the job. Prior to the pandemic, one of the few guidelines to follow was to carefully check IDs for underage drinkers. Once the pandemic hit, it only made navigating the challenges of managing a restaurant that much more difficult. The constant changes in health guidelines required patience from her, the other managers and the staff, as they worked to help customers understand how the mandated rules kept everyone safe.

At one point during the peak of the pandemic, Duke’s Waikiki was the only restaurant available for people to get food in Waikiki and in the surrounding area. Justine and the management team would keep the restaurant afloat by fulfilling orders for people that ordered takeout. Luckily, all the managers that worked at Duke’s Waikiki started out as servers, which made the transition from managing a team to personally completing orders second nature.

Justine credits much of the success in her current role to her Lanai roots.

“Growing up on Lanai, we relied heavily on each other,” explained Justine. “In my family, I grew up with the mentality to make sure I’m doing my part to do my chores and help my mom out. Growing up on Lanai definitely made me who I am today.”

From her time on Lanai, she also learned to respect and help everyone out even if she doesn’t personally know them.

“On Lanai, you’re always helping everyone out and that’s what I find myself doing here too. As a manager, we connect with employees and build respect with them, because I like knowing something about them, not just the department they work in,” said Justine. “Growing up on Lanai has helped me to accept people no matter what, especially because my brother grew up with a disability. Now, I’m very open and accepting of all kinds of personalities and humans.”

Justine currently lives on Oahu with her partner, their son, dog and cat. She tries to spend as much time with them as her busy work schedule allows. She spends her days off going to the beach, fishing or playing board games with them. Sometimes, they don’t plan any activity in particular and simply enjoy each other’s company.

The hustle and bustle of living on Oahu has taught her to appreciate a simpler and more peaceful life of fishing, hunting, playing basketball and spending a relaxing time with her family. She misses her mom’s home-cooked meals (even the leftovers) and being able to pick up her friends that live just down the road to go to the store.

Due to the pandemic, Justine has only been able to visit Lanai twice – both times for her niece’s birthday. However, she is excited to start visiting more often as most of her family still lives on Lanai. One day she hopes to move back to Lanai if the timing is right, and she wants those on Lanai to know that it’s okay to be a little terrified to pursue opportunities outside of the island.

“I never aspired to be a manager because I thought there was no way I could manage people,” said Justine. “I used to get so stressed out about meeting people because I grew up on a small island my entire life knowing everyone. But it’s truly about your mentality. If you’re willing to learn, you’ll open so many doors and it’s scary, but the more you do it, the better it will get each time.”