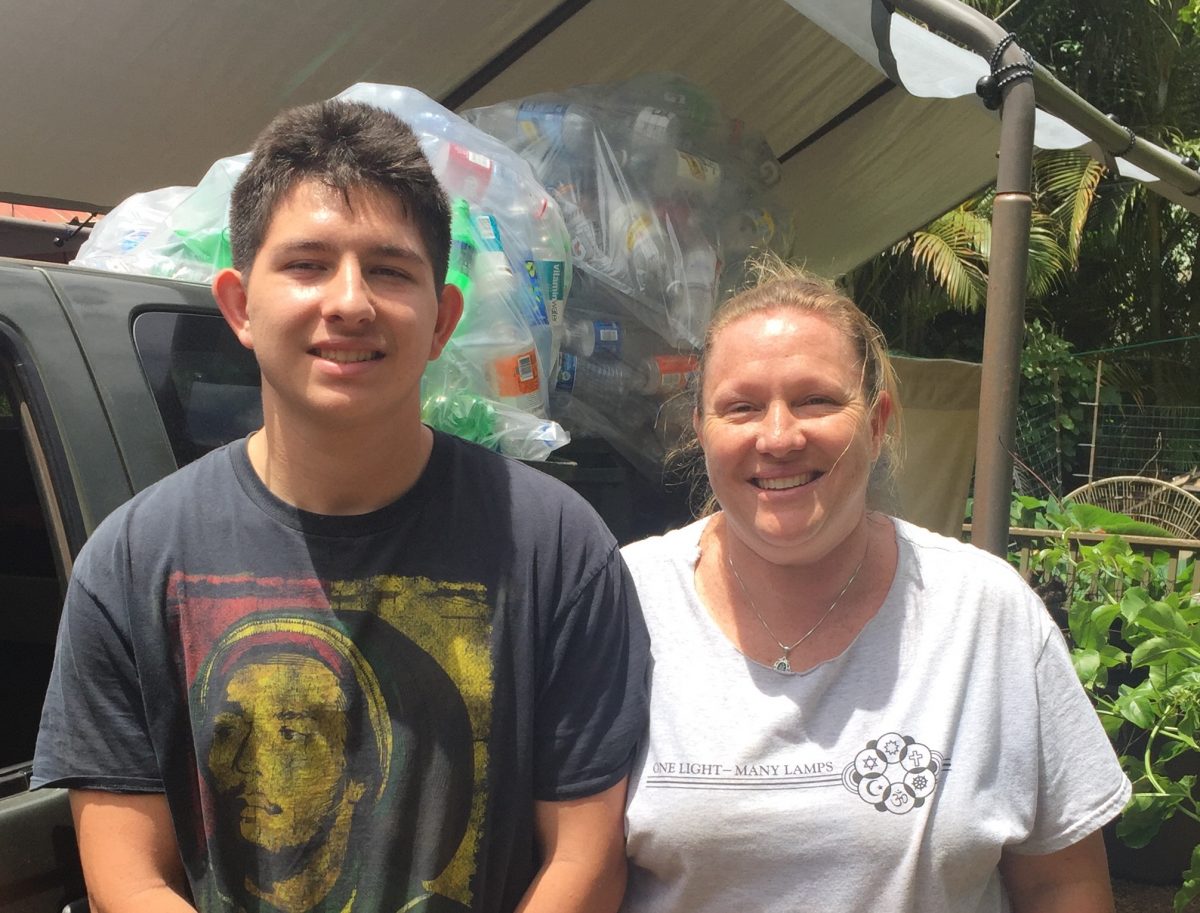 For Chelsea Trevino, library technician at Lanai Public and School Library, recycling is more than a chore – it’s a family affair.

“The initiative began with my mother, Lorry, who was concerned people weren’t recycling on Lanai,” says Chelsea. “She’s in her retirement and thought she could give back by keeping things out of the landfill.”

Getting the Word Out on Going Green

Lorry Cornish established her recycling route by using the coconut wireless method. She started by asking neighbors and friends if they wanted their recyclables picked up, and word quickly spread.

“Several businesses have asked her to come pick up their recycling,” says Chelsea. “My mom provided a few people with bins too, making it even easier for them to recycle their bottles and cans.”

Lorry now shares her route with Chelsea and her teenage son, Mason, who were looking for a way to make a little extra cash. “I helped expand the route by making an additional shout out on Facebook to let people know we would pick up for them,” explains Chelsea.

Today, thanks to word of mouth and social media, the Trevino family picks up bottles and cans from about 30 homes and businesses in Lanai City.

Picking up and processing the recycling for 30 community members and Lanai businesses is a bit of an undertaking. Every other week, Lorry, Chelsea and Mason pile into Lorry’s truck and pick up plastic bins full of recyclables that community members put out for them.

“We begin around 8 a.m. and wrap up around noon,” says Chelsea. “We always fill up the back of the truck with barrels of glass containers and about five to seven bags of aluminum cans.”

Together, the trio sorts and cleans the bottles and cans before dropping them off at the recycling center. During the month of April, they kept a significant amount of materials out of the Lanai landfill by recycling:

Going Green and Giving Back

For Lorry, Chelsea and Mason, it’s also important that their recycling efforts benefit non-profits on the island.

“We always donate 10 percent of the money collected each month to a charity,” says Chelsea. “In March we donated $35 to the Cat Sanctuary and we’ll make a $32 donation to a non-profit for the month of April.”

In addition to the cash donation to a Lanai charity, Chelsea also hopes her son Mason is learning about community stewardship and the value of a dollar.

“I hope he’s inspired. I am trying to teach him that four to six hours of recycling is worth sacrificing two Saturdays a month.”

Chelsea also believes that recycling has increased her sense of kuleana, or responsibility, for the island of Lanai. “I grew up here, but I never had any awareness about recycling and how important it is. I look at the volumes of cans and bottles we pick up, and I will never put aluminum or plastic containers in the trash again.”