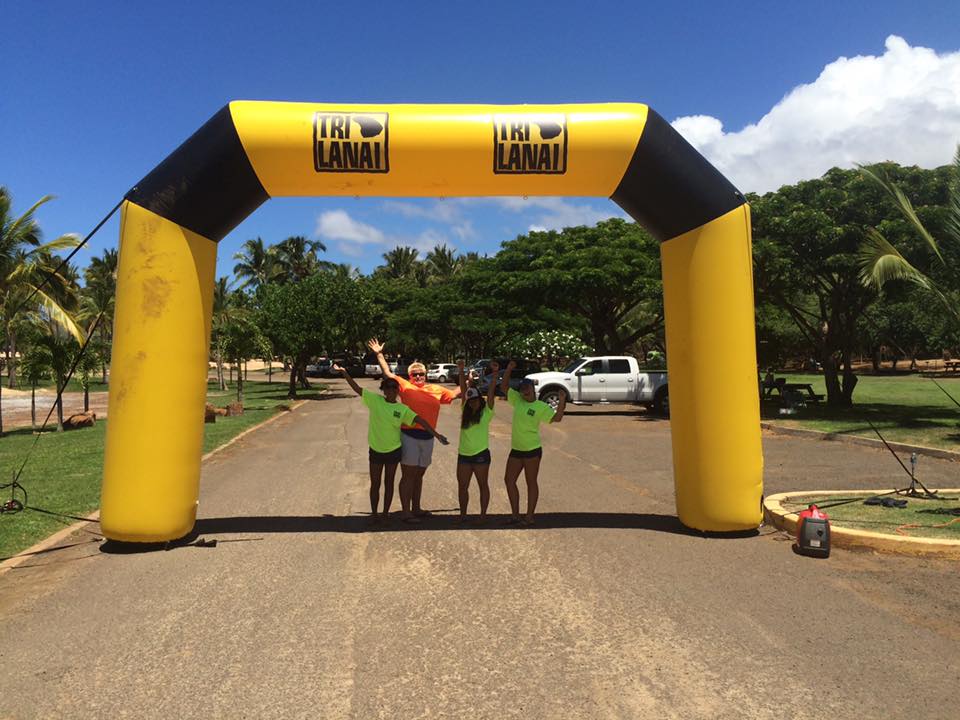 This October marks the seventh year that competitors will race in TriLanai, a sprint-distance triathlon designed to showcase the natural beauty of the island and give back to the Lanai community.

The race starts with a half mile swim in the Hulopoe Bay marine preserve, is followed by a ten-mile bike up the rugged road to La Ola Solar Farm, and concludes with a three-mile run on The Challenge at Manele Bay Golf Course.

The sprint triathlon attracts visitors from Maui, Oahu, and the mainland, but it also brings the Lanai community together for friendly competition and community service. Families, friends and co-workers often form training groups and relay teams, and parents and children sometimes compete in the race together.

The event is also a popular volunteer activity with Lanai residents, athletic teams and other youth organizations who man aid stations, sign-in race participants and take on other tasks as needed.

A Triathlon is Born

The inspiration for TriLanai came in 2008 when former Lanai resident Chris Lovvorn competed in a mini triathlon on Oahu. He enjoyed it so much he hoped to create a similar event on Lanai.

The very first race took place in 2009 and Lanai residents eagerly supported the inaugural event, which boasted a 1-1 volunteer-athlete ratio.

“Some volunteers really notched it up, and had their BBQs going at their aid stations,” laughs Lovvorn. “I swear a few athletes crossed the finish line with half a cheeseburger in their hand.”

After the last athlete crossed the finish line, Lovvorn and the TriLanai volunteer executive committee set more formal goals. They saw the event as an opportunity to engage and contribute to the Lanai community and local economy, and began reaching out to additional corporate sponsors and local vendors. Their efforts raised money for Lanai non-profits for activities and programs that promote health and wellness on the island.

By 2013, TriLanai had put nearly $100,000 back into the community and had grown into a series of three separate events, including the City Run, as well as Three Hills, a longer road race for cyclists and serious runners.

In 2013 Lovvorn relocated to Oahu for work, and decided to hand off the events to Todd Winston, TriLanai’s race director and a part-time Lanai resident.

Winston, who has been a part of the Lanai community for over 20 years, was eager to continue the events, and has bolstered TriLanai by obtaining additional sponsorships, launching a new website, and working with state and local governments to maintain access to the courses and ensure the safety of all participants and volunteers.

“The most rewarding part of TriLanai is seeing the community getting involved as volunteers, racing, and putting on a show – a show of aloha that welcomes everyone to Lanai,” says Winston. “We strive to make the event a superior experience for both athletes and volunteers, and for those who are visiting, to stay and play!”

Giving Back to the Community

True to its greater purpose, TriLanai events continues to contribute proceeds toward local organizations and sports teams. The organization awards annual grants for health and wellness activities and programs, and the event bolsters business for Lanai City shop owners. In addition, TriLanai awards two scholarships to high school seniors competing in the triathlon.

“We want to support students interested in playing sports in college,” says Winston. “It is difficult to access athletic recruiters and the attention of college programs all the way out here. We hope this scholarship may help them pursue their collegiate dreams.”

This dedication to student-athletes and the Lanai community is one of the reasons why Assistant Race Director Shelly Barfield enjoys volunteering with the executive crew. Her own daughter, now a collegiate softball player, competed in the Triathlon last year and enjoyed the friendly competition.

This year’s TriLanai triathlon will be held on October 29. Visit their website to learn more and be a part of the fun and support the community by signing up for the race as a volunteer.