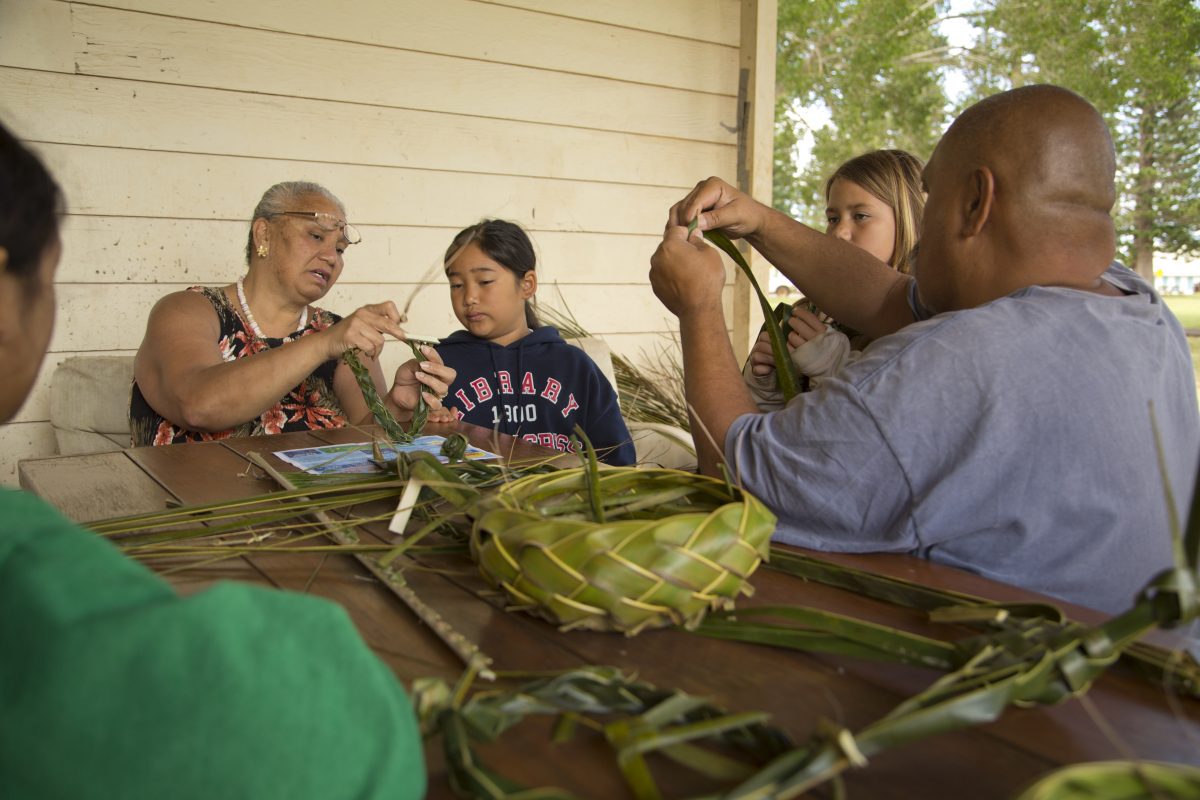 Aunty Irene and Uncle Bully Davis have served as the unofficial ambassadors of Lanai for years, spending countless hours teaching visitors of the Four Seasons Manele Bay Hotel and The Lodge at Koele about Hawaiian culture, crafts and the true meaning of aloha. This summer, Uncle and Aunty will dedicate more of their time to educate and engage students in “Moolelo O Lanai: The Stories of Lanai 2015.” And, they’re enlisting their friends, too.

Originally from Makaha on Oahu, Aunty Irene and Uncle Bully moved to Lanai and settled near Keomoku in 1986. Aunty Irene’s expert weaving skills got her recruited by the Four Seasons to run its children’s cultural program, where she’s been on and off for more than 25 years.

You can find the Davises in the Manele Bay Hotel lobby four days a week, often with guests of all ages, patiently weaving coconut and lauhala fronds, making lei, strumming the ukulele or teaching hula.

Teaching keiki the stories of Lanai

Soon, they’ll be taking a break from their work at Four Seasons to spread their knowledge and love of Lanai to LHES students in Mo‘olelo O Lanai, a fun and enriching seven-week summer program in which students will learn the unique stories of Lanai and practice Hawaiian values to improve their skills in various areas.

“I feel very honored to be a part of this collaboration and learning experience,” said Aunty Irene, who is working closely with Pulama Lanai, LHES and Four Seasons to plan the extensive program. “We believe strongly in passing down the values and culture to the next generation. Teaching them to malama, take care of each other and the island, is an important part of that.”

Participants will learn Hawaiian songs, hula and chants, including “E Ala E,” “Hanohano Lanai” and “Oli Mahalo.” Students from ages 5 through 18 will also participate in arts and crafts, music, dance and take field trips to Lanai’s storied places.

“We’ll learn about history and the ecological aspects of the shorelines and fishponds, but there will be other elements as well,” said Aunty Irene. “We’ll pick up trash to care for our land and community. We’ll collect shells and kukui nuts to make jewelry and puppets. We’ll gather plants to make lei. It’s all about using what you have and respecting the land.”

The Davises, along with Four Seasons, Pulama Lanai and numerous community volunteers, have spent months developing a stacked lineup of educational and fun activities.

“As a mother, I know parents will want to be assured that there are educational aspects to the program and not just playtime,” said Aunty Irene. “I want our keiki to look at learning through a different lens. It can be exciting to use different activities to learn more about math, science and literature.”