It’s that time of year again — the annual resident hunt is an opportunity for Lanai hunters to get out on 30,000 acres of Pulama Lanai game lands.

Open to Lanai residents only, the hunt is an island tradition that locals look forward to every fall. The best part is, it’s absolutely free to register.

Last Saturday, Oct. 7, hunters as young as 10 years old took to the areas bordered by East Hauola, Munro Trail and the ridge east of Manele and Keomoku Road. Over the next two Saturdays, all hunters over the age of 15 will have their chance to bag up to four axis deer or mouflon sheep.

The annual hunt draws an estimated 180 residents every year, but hunting is a common pastime on island at nearly any time of year. No matter the season, keeping firearm safety top of mind and taking the time to revisit the rules and regulations will ensure a safe and lawful hunting trip.

“When it comes to hunting and handling firearms, safety should always be the foremost consideration,” said Mike Donoho, senior vice president of natural resources.

“Knowing the law and maintaining a respect for guns as a hunting resource, as well as respect for one another, will ensure we can all continue our hunting tradition on Lanai,” he continued.

Alec Pascua, Pulama Lanai game manager, says his No. 1 recommendation to all gun owners is to invest in a gun safe to secure their firearms when not in use. This precaution helps keep firearms out of the hands of keiki or those who are not trained to use them properly.

– Treat every firearm as if it were loaded.
– Never point a firearm at anything that you don’t intend to destroy.
– Always be sure of your target and what’s behind or beyond it.
– Always keep your finger off the trigger until you are locked on target and ready to fire.

Practicing these rules at all times while hunting helps keep everyone — hunters, non-hunters and especially keiki — safe from harm.

Know the rules of the land

In addition to general safety measures, Donoho stresses the importance of following the rules set by the state of Hawaii, Maui County and Pulama Lanai.

Rules related to the proper disposal of carcasses should be followed not only to avoid contamination and other health issues, but to practice good hunter ethics. It’s unfair and unsightly to leave a mess for other hunters or landowners to deal with, and projects a negative image of hunting to those who don’t hunt.

Most importantly, designated hunting areas and rules against firing in certain directions (such as toward beaches, trails or roads) help keep bystanders safe from stray bullets.

Donoho encourages all hunters to familiarize themselves with the new Pulama Lanai Game Management hunting rules, and to brush up on state and county rules before their next hunt.

Open to permanent Lanai residents with a valid State of Hawaii Hunting License. 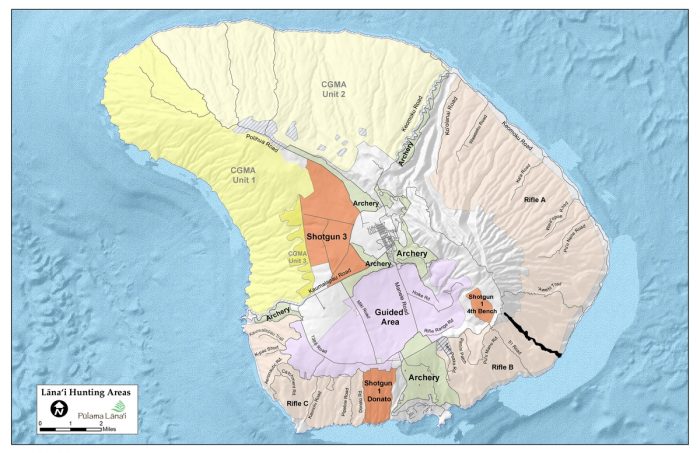