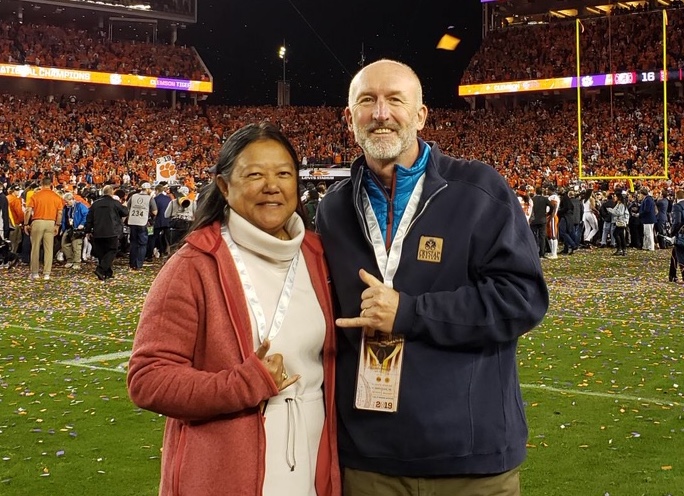 Will Sankey and his wife of 22 years, Julie Magaoay, knew that one day they’d move to Lanai. She was born and raised here, and graduated from LHES.

“It was always our plan to live on this beautiful island,” he said.

Lanai is a far trip from Skaneateles, a small town in upstate New York, where Sankey is originally from. However, it’s just a short plane ride from his adopted home of Honolulu, where he’s lived since 1991. For the past 10 years, he taught economics and politics and government at Radford High School on Oahu.

Now that he’s teaching at his wife’s alma mater, Sankey is excited about the diverse subject matter he gets to dive into with his students. This year, he’s teaching 9th grade physical science, as well as marine science and Hawaii plants and animals with his 11th and 12th graders.

He also teaches financial literacy as part of a study skills course for freshman, a subject he feels is particularly valuable for teenagers.

“My goals are to support improved thinking and better decision making in the context of the great courses I get to teach,” he said.

Settling into life on Lanai

Since moving to Lanai this summer, Sankey has had fun exploring the island by land and sea. An avid outdoorsman, he enjoys mountain biking, hunting, fishing, paddling and swimming. He also likes to work on his golf game when he has a chance on Lanai’s two beautiful courses.

Moving to Lanai — or in his wife’s case, returning home — has been a longtime dream for the couple. Now that he’s finally here (Julie will follow in a few months), what Sankey enjoys most of all are the friendly waves from friends and neighbors as they pass. It’s not unlike the small town he grew up in.

“You know most people, you build positive relations with your neighbors,” he said. “I look forward to getting our home built and my wife moving over here after her current project.”