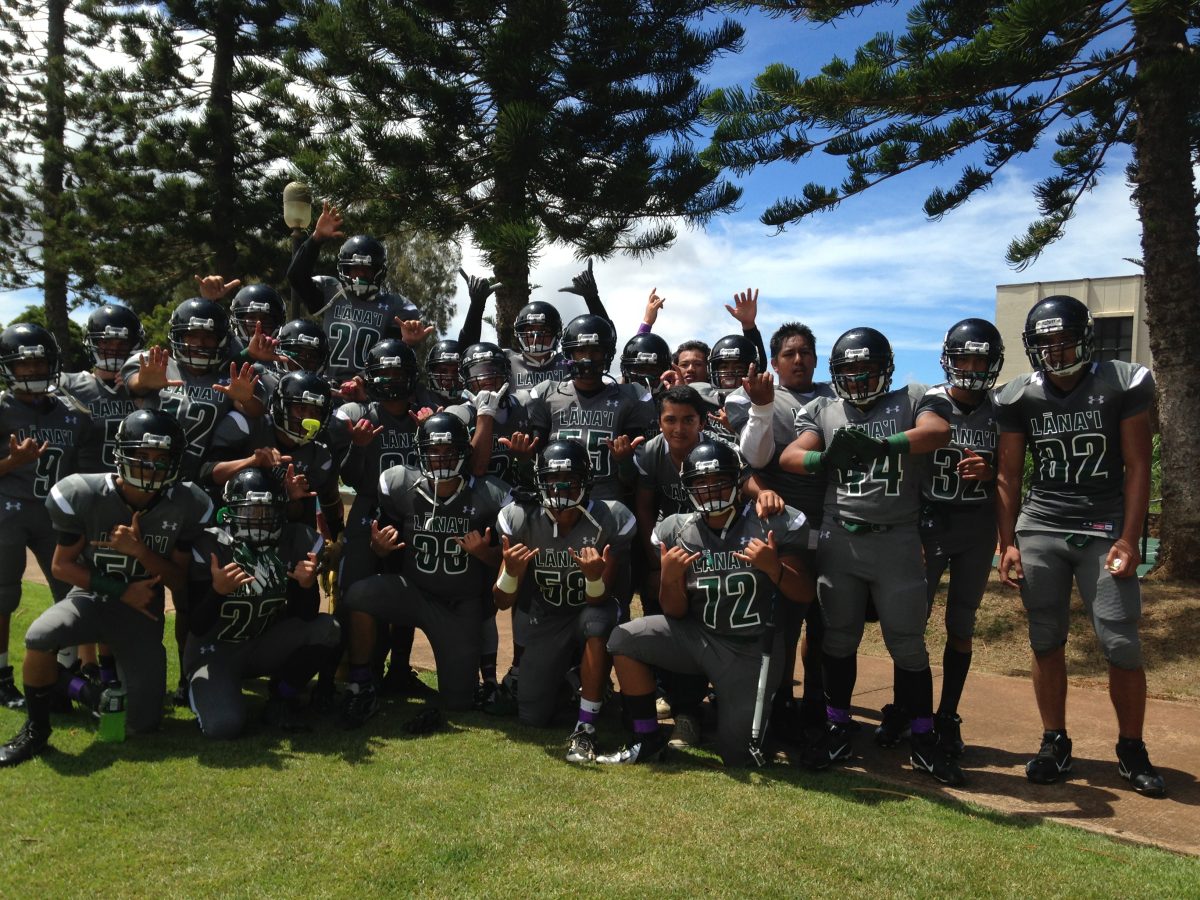 Old-timers on Lanai may have felt a rush of nostalgia watching the Lanai High Pine Lads take the field against Molokai on Saturday, Sept. 13. Nearly 400 students, staff, relatives and sports fans turned up to Lanai Community Sports Complex for the first MIL eight-man football game of the season in 60 years to cheer on the Pine Lads. Though Molokai beat LHES 33–0, the Lanai players held their heads high and made the community proud.

Times sure have changed since 1953 when the last LHES football team took to the field. Back then, pineapple fields blanketed the island and Hotel Lanai was the only commercial accommodations for travelers to the island, which was still a territory of the U.S. No one could have guessed at the time that football would not return to LHES due to lack of players for six decades.

Bringing football back to Lanai

Restoring the Pine Lads football team was a community effort that began as many great ideas do, with a few residents talking story. Discussion turned to bringing back high school football — an exciting idea, but how? Lanai took its first step toward that goal in 2007 by establishing Lanai’s first Pop Warner team in which kids ages 8 through 11 cut their teeth playing Maui teams in the Pee Wee division. Two players from Saturday’s game, Kerl Manuel and Luke John Sandi, were members of the original team.

Fast forward to 2010, when Roderick “Sumi” Sumagit took over as athletic director at LHES and at the request of residents began looking into funding options for a high school team.

“It’s a lot of money, especially for a small school like us to start a program almost from scratch,” said Sumi. “Most people don’t know that it takes $400 to suit up each individual player. Then a coach and staff need to be hired to organize the team. Plus, there’s the cost of travel between islands. Unfortunately, we can’t just get on a bus and drive to games on Maui.”

Sumi proposed to set aside a portion of the athletic budget each year for the program. Finally, after many years of hard work and dedication from family members, parents and the community, driven by a love of football and support for LHES, the Pine Lads made their long-awaited comeback and began practice in August.

Head coach Stephen “Fergie” Ferguson leads the 31 players, who voted “One team making history” as their slogan for the year. The team is comprised of Pop Warner alumni, as well as first-timers who have never played an organized sport before this year.

This season would not have been possible without the support of the Downtown Athletic Club Hawaii. Sumi credits the DACH board members: Keith Amemiya, Peter Ho, Kalowena Komeiji, Duane Kurisu, Don Murphy, Ray Ono, and Kurt Osaki for spearheading a “Cheers for Molokai and Lanai High” fundraiser earlier this year, which raised more than $40,000 for LHES’s athletic program. Parents of the players continue to fundraise for upcoming games with special T-shirts to commemorate this inaugural season.

Of course, the biggest show of support we can provide is by backing up the team and coming out to games. The football team’s next home game is against Seabury Hall at 1 p.m. on Oct. 18. If you’d like to support the Pine Lads and ensure football remains at LHES for years to come, purchase a shirt from any team member or by contacting Coach Fergie.