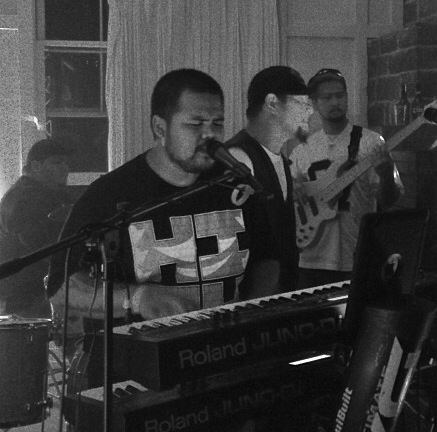 If you’ve attended a graduation party or community event on Lanai in the past several years, chances are you’re familiar with the sweet sounds of homegrown reggae/island music band Redkrown. Ricky Sanches, Jr., Ross Morita, Sam “Kamu” Soriano, Clayton “Kazu” Nohara and Ceysha Akau have shared their love of music and performing with the community since 2012, when they began playing at family gatherings. Since those early days of free gigging, their increased popularity has opened up even more opportunities for Redkrown to showcase their music to a wider audience. They made hundreds of heads bob and brought fans to their feet at recent performances at the Pineapple Festival and Harmony Tour on Lanai, as well as their standing gig at Life’s a Beach in Kihei.

Redkrown’s history goes back 10 years, when lead vocalist and keyboardist Ricky moved home to Lanai after attending Kamehameha Schools on Oahu. Ricky met up with his old friend Ross, a bass player and vocalist, for a few jam sessions in a friend’s garage. They were overheard and asked to play at a graduation party, and as they say, the rest is history. Throughout their evolution, they recruited Kamu, who plays the drums, Kazu, who plays the guitar and provides vocals, and Ceysha, who also plays the guitar and sings.The newest member of the group is Kayla Sanches, Ricky’s wife, who plays the keyboard and also took on the role of band manager.

In the early days, the yet-unnamed band performed around town for no more than a case or two of beer as payment. They became known for drinking Red Bull and Crown Royal at their concerts, and the nickname Redkrown stuck. Though they still often get paid in cases of beer, they all love the music and memories that they share with each other and the contagious energy of the audience when they perform.

“Music is more than just a job, it’s a passion. We have fun, it’s something we love,” said Kayla. She, as well as Ricky, grew up within a family of musicians. “We’ve always been around music. We’re influenced by lots of different musicians — Hoaikane, Kapena, Ekolu, Bob Marley, SOJA…I could go on and on.”

Future plans for the band

Redkrown has lots more in store for their fans. Ricky writes his own music, as does Ceysha. They both draw from real-life experiences for inspiration and hope to compose enough original tracks to record an album in the near future. Skank it up with Redkrown at Lanai’s first-ever 5th Friday on Aug. 29, when they’ll be playing a special after-hours set at Pele’s Other Garden from 9 to11 p.m.