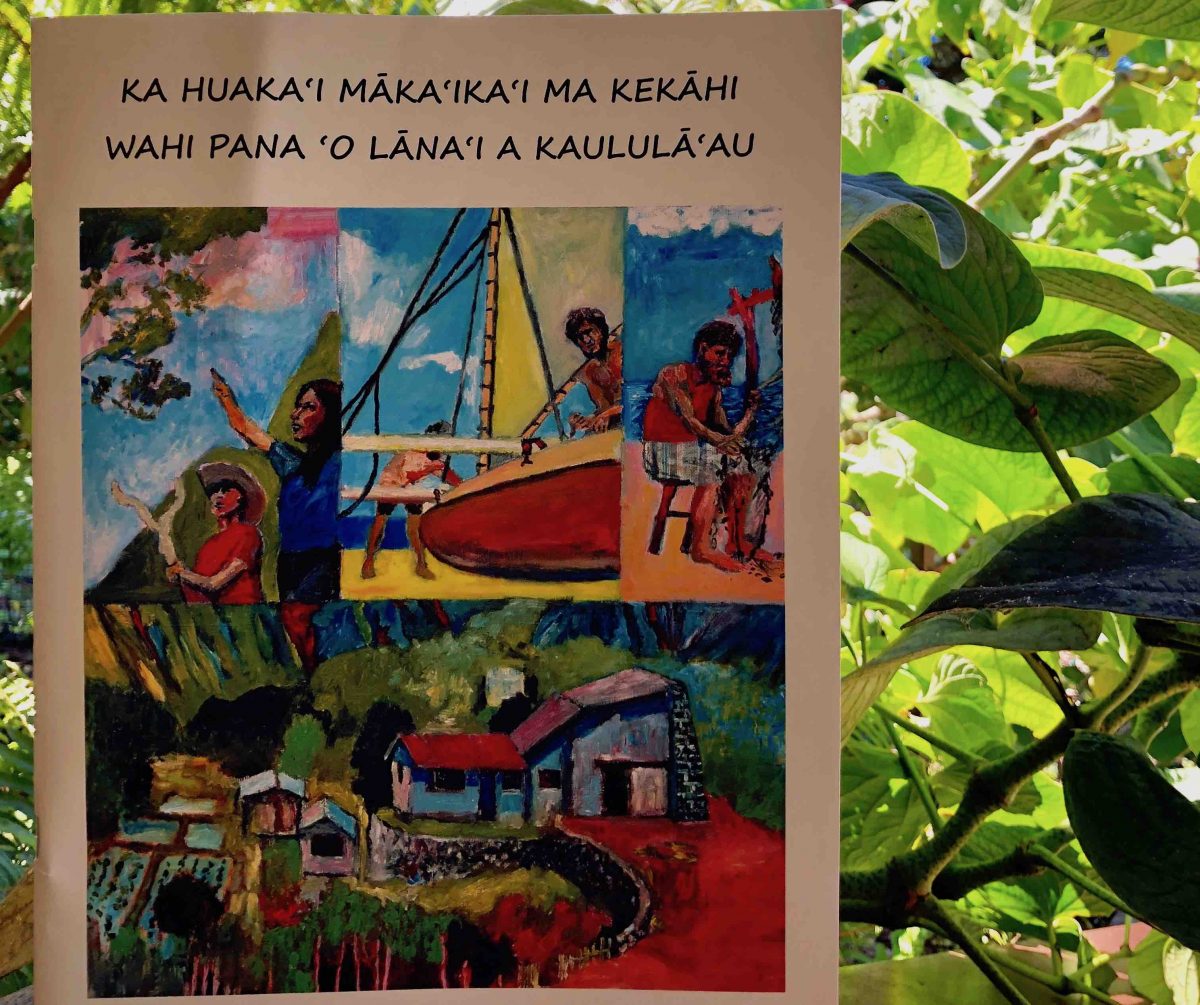 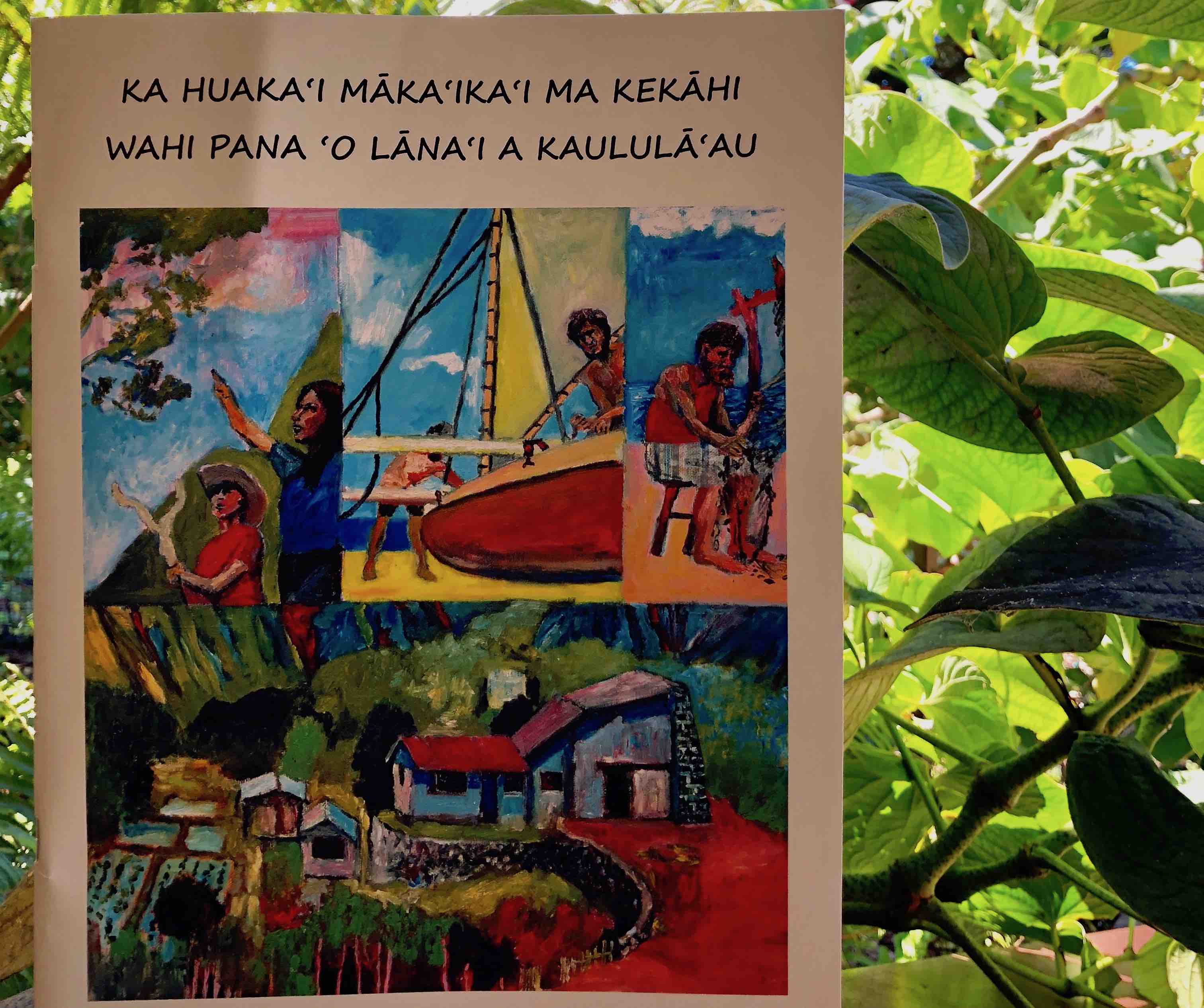 Part of living on Lanai is knowing the history of its storied landscape, long before it became known as the Pineapple Isle.

For many years, the Lanai Culture & Heritage Center (LCHC) has worked with other community organizations to capture the stories and traditions of Lanai and share them with others.

Recently, the center celebrated a milestone achievement in its efforts with the completion of a puke kamalii (children’s storybook) called Ka Huaka‘i Māka‘ika‘i ma Kekāhi Wahi Pana ‘o Lāna‘i a Kaululā‘au (“A Trip to Visit Some of the Storied Places of Lanai a Kaululaau”).

Over a decade in the making

In 2007, LCHC first began working with Lanai High & Elementary School (LHES) to develop a placed-based curriculum, including resources for teachers to bring Lanai’s history to life in the classroom.

“Traditions tell us what the land was like and how it influenced the lives, well-being, sustainability and progress of the people of Lanai,” said LCHC executive director Kepa Maly. “We wanted to help bring a living classroom — our island — into the school.”

Several years later, in 2012, LCHC got a federal grant that gave the center funding to begin building more robust educational programs. The grant planted a seed of opportunity that began growing in 2015, when Maly suggested they create a children’s book to share the stories of Lanai.

Maly began writing the stories for the book in Hawaiian and English, drawing inspiration from his own youth, when he listened to oral traditions passed down by kupuna.

He enlisted the help of Diane Preza, a longtime Lanai educator, and her daughter Shelly Preza to edit the book. “The writing and storytelling were done mostly out of love,” explained Maly.

In 2017, the Maui County Office of Economic Development gave LCHC a grant to fund the final pieces that would bring the book to life — artwork and printing.

The paintings depict a group of young Lanai students and their teacher as they embark on a journey from Lanai City to Koele to Maunalei Valley. Along the way they learn about places, practices and their own responsibility to love and care for the land.

Thanks to the grant, LCHC was able to print 500 full-color copies in Honolulu. Over two hundred copies were donated to LHES, the local library and the pre-school. The remaining copies will go to Lanai families, free of charge.

Lanai residents interested in receiving a book can visit LCHC to receive one copy per household. Books are available on a first-come, first-served basis, while supplies last.

Sharing with the community

The years-long effort to complete the storybook culminated in a special community event held at LCHC on Oct. 19. More than 50 residents of all ages turned out for an evening of storytelling and celebration as the puke kamalii was unveiled for the first time.

The crowd enjoyed readings from Maly (in Hawaiian) and Diane Preza (in English), and each family took home their own book.

“I hope families can share these stories together while building quality time with each other,” said Maly. “It connects ohana to place and at the same time promotes awareness of real stories in island history.”

Even after its successful publication, the puke kamalii project lives on. Laikealoha Hanog, a kumu hula on Lanai, asked Maly to compose a song about cultivating taro at Maunalei to share with the children. Maly’s song became the basis for a video created by Shelly Preza and Anela Evans, which shares artwork from the book along with scenes from different places on Lanai.

In the future, Maly sees even more opportunities for puke kamalii. “We are looking at opportunities to turn this into a small series of books,” he explained. “We could do books that take us from Lanai City to Kaunolu, Hulopoe or Keahiakawelo. The point is to perpetuate knowledge and promote care for places and resources.”

To donate to Lanai Culture & Heritage Center and the puke kamalii project in particular, visit www.lanaichc.org. Donors may choose to designate their donations to future puke kamalii publications.