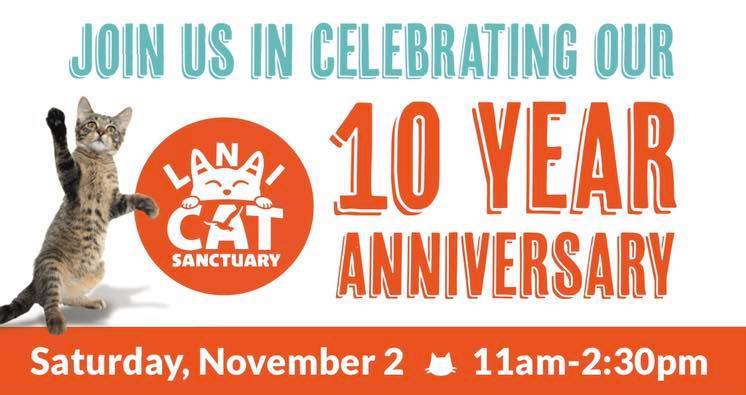 Female cats can have three litters a year, with three to five kittens in each litter. If left to roam in the wild, the fast-reproducing cat population can threaten native birds.

In an effort to control the feral cat population, Kathy Carroll opened the Lanai Cat Sanctuary in 2008. For the past 10 years, the haven for formerly homeless cats has become a cat lover’s paradise and a main attraction for visitors to the island. Lanai’s birds rest a little easier as the once-wild cats peacefully roam the enclosed space after being microchipped, vaccinated, spayed and neutered.

To celebrate 10 years on Lanai, the Lanai Cat Sanctuary is hosting a special anniversary party on Nov. 2 with a scavenger hunt and over $2,000 in prizes, including AirPods, Hawaiian Miles and a 4K TV. There will also be homemade chili cheese dogs and live music by Dale Kapua. An awards ceremony will honor community members who have helped to sustain the sanctuary over the years.

In its 10 years of operation, the sanctuary has sterilized more than 2,000 cats and has adopted out more than 350 cats. Over 13,000 people now visit the sanctuary each year, and many of those visitors come to Lanai just to visit the felines.

For almost 18 years, Keoni Vaughn has been involved in animal welfare, previously working for the Hawaiian Humane Society on Oahu. Six years ago, he started working at the Lanai Cat Sanctuary, and now serves as its executive director.

Although the shelter looks like a kitty heaven, caring for the animals 365 days a year is a complex operation, especially without electricity. Right now, the shelter is “off the grid” with only a small water line, but Vaugh says they are in the process of getting electricity and internet. The ten staff members work tirelessly to provide care to the cats and host more than 1,000 guests every month. “Working in animal welfare can be tough but everyone works so hard to make the guest experience so special,” said Vaughn.

A model for helping cats

As a nonprofit, the sanctuary relies heavily on donations to keep running. Thanks to contributions from visitors and supporters, the sanctuary recently expanded to serve more cats and add more treatment centers for new arrivals. Soon the center will have the capacity to house up to 1,100 cats.

Vaughn hopes that other communities with feral cat issues will be able to replicate their model. “I hope we can be a model for other communities. While it’s not necessary the only solution to the issue of cat overpopulation, it is definitely a tool that could be considered,” he said. “Even for people who don’t necessarily love cats, they are very supportive of what we are doing and get the bigger picture.”

Join the Lanai Cat Sanctuary for its 10-year anniversary celebration this Saturday, Nov. 2, from 11 a.m.­–2:30 p.m. for games, prizes and lots of kitty love. Contact keoni@lanaicatsanctuary.org to donate prizes or volunteer.