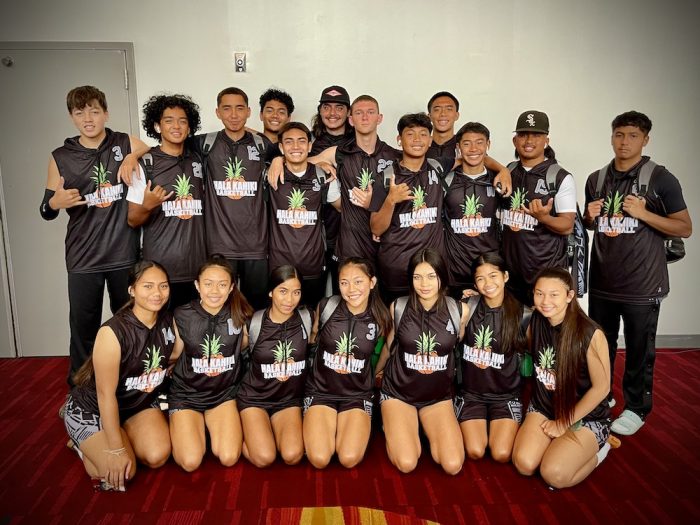 In 2018, three Lanai High & Elementary School (LHES) coaches recognized the need for more opportunities for high school basketball players on Lanai to improve their skills outside of the regular school day through training, drills and competing against teams off-island. Christian Yumol, who was coaching a Maui Club team at the time, witnessed how expensive it was for kids to constantly travel from Lanai to Maui to participate in fundraisers and practices. He thought, “We have talent on our island too, so why not.” Thus, the Hala Kahiki Basketball Club was created.

MaryLou Kaukeano, Christian Yumol and Elmer Agtarap soon turned this ambitious idea into reality, instantly garnering the interest of players on Lanai. While MaryLou handled logistics, Christian and his brother-in-law, Elmer, took on the coaching role.

Practice began with 4-6 a.m. training sessions with 10-15 kids in attendance. The training sessions included breaking up into groups as well as practicing in pairs, then alternating between weight training in the gym and drills on the outdoor basketball court. After school, starting in March when time and weather permitted, the club would gather for skill enhancement training by playing in teams. Although it may seem intense for high school athletes, Christian’s goal is to prepare them to become college athletes in a high school setting. He attributes his coaching technique to Kobe Bryant, American professional basketball player who is widely regarded as one of the greatest players of all time. “Kobe’s theory on training as a professional athlete was about how many workouts he could get in a day. If you train at 4 a.m. and put that much more work in, the separation between you and your peers gets that much larger,” said Christian. “I’ll always tell the kids, ‘trust the process.’”

Prior to the pandemic, training was year-round and offered to all kids that wanted to participate. Flexibility for the coaches was key as some kids played as many as three sports, rotating between fall, winter and spring. However, once the pandemic hit, everything paused, and MaryLou, Christian and Elmer are in the process of trying to return the club to what it once was. “These kids want to be here. They want to play, they want to travel, and they want the opportunities. They know they have something special that they worked for,” said MaryLou.

This past July, after a long hiatus from club practice, the junior varsity (JV) boys, varsity boys and girls basketball teams finally had the opportunity to compete on a bigger stage — in Las Vegas, Nevada.

The three teams participated in Division III in the West Coast National Championship and the Las Vegas Classic, two tournaments that took place back-to-back. As this was Christian’s third time in his career bringing teams to Las Vegas tournaments to compete against national players, he pushed the Lanai teams to try their absolute best.

Going from practicing on an outdoor basketball court to playing on indoor courts, then competing against players that are taller in stature, proved challenging. But overall, it was a solid trip. The players and coaches were able to learn a lot about themselves and experience taking part in large tournaments at a national level. According to Christian, the JV boys were impressively close in many games and the varsity boys had tough matches after having such a long break.

The girls’ team showed off their hard work and fought their way to second place in the West Coast National Championships and proceeded to place third in the Las Vegas Classic. “These girls don’t quit,” said MaryLou. “Christian had a hat made for them that says, ‘#catchusifyoucan.’ We may not always win the game, but we gain a lot of respect.”

One of the main goals of participating in the tournaments was to have the players experience teamwork in a completely different setting. Another goal was to give recruiters the chance to see the Lanai basketball players in action.

Over the past 10 years, around 30 LHES athletes received scholarships to play sports at universities across the nation, from Pacific Lutheran University in Washington to Doane University in Nebraska.

Although the Hala Kahiki Basketball Club was originally created for exposure, not recruiting, after seeing the motivation and drive in the kids, Christian felt compelled to research recruiting opportunities to help students that could use the extra financial assistance to get into college. Through funding from an Island Club resident, the Hala Kahiki Basketball Club was able to purchase a team account for Next College Student Athlete (NCSA), an organization that connects student-athletes with college coaches. Additional access for accounts is worth $1,000 each and is offered to the students for free. From start to finish, Christian assists with the step-by-step process of communicating between parents, counselors and coaches to get students recruited.

It takes hard work, late nights and a lot of coordination from MaryLou, Christian and Elmer to run the club, which includes practices, training, fundraising and travel coordination. When players return to Lanai to visit, they sometimes make it a point to let Christian know what a difference sports has made in their life. “My reward is seeing these kids actually invest the time and effort into getting there, and I’ll take it all day,” said Christian. “When kids that are away at college reach out to me to tell me that, it keeps the fire going.” 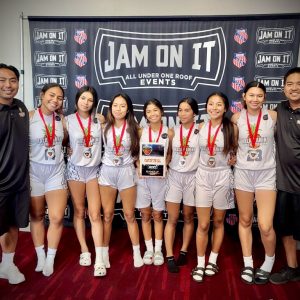 Not Your Average Sports Club

A Hyper Local Approach to Familiar Dishes at the New LCBG

Where Are They Now – Blaise Dimaya