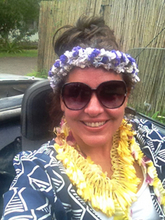 When people find out that Melissa Champlin manages patient care at Hospice Hawaii-Lanai, they often assume her job is filled with grief. However, Melissa says it’s quite the contrary: She says caring for people at the end of life is fulfilling, meaningful and inspiring and she can’t imagine herself doing anything else.

Melissa was recently recognized for her hard work and compassion when she was named a Healthcare Hero by the Healthcare Association of Hawaii, in the award’s inaugural year. She was one of only five healthcare professionals across the state honored for going above and beyond the call of duty for their patients. This accomplishment was made even more special because Melissa was nominated by the family of her former hospice patient.

“I am truly humbled and grateful to be of service to Lanai. Being called a Healthcare Hero gives me a feeling of validation, like I know I’ve found my calling doing this,” Melissa said. “It is so gratifying to know that I was able to be of some comfort to a patient and family during their time of need, and that they would be kind enough to share their story. But none of it would be possible without the partnerships we share with our fellow healthcare organizations on Lanai.”

Originally from Orange County, Calif., Melissa’s plan to go to law school straight out of college was halted when her father became ill. She stayed home to care for him and that’s when she realized how much he and her family could have benefited from hospice care. Melissa went on to earn a nursing degree, and when a series of events led her to Lanai, she set out to help bring hospice care to the island.

The effort took over a year and would not have been possible without collaboration between Lanai’s many healthcare organizations and the Oahu-based Hospice Hawaii, which has been unwavering in its commitment to serve the people of Lanai. Hospice Hawaii-Lanai served its first patient in July of this year. Melissa and the team at Hospice Hawaii-Lanai staff have since assisted three patients and their families, and the need is growing.

Although working with patients at the end of their lives can be challenging, Melissa says she has gained wisdom from each and every experience. “I have had so many life altering experiences caring for others,” she said. “As a young nurse, I once cared for a patient whose strength reminded me of Rosie the Riveter from World War II. She had a terrible illness, was losing her ability to do the things she loved, but was determined not to feel sorry for herself — she was full of vim and vigor! I was amazed each day that I cared for her and realized that I had to know her secret. Sitting bedside, looking at old photographs of her life, I finally got up the nerve to ask her. Although weak, she smiled with a huge grin and whispered, ‘Stick with the happy people!’ That was it. I was hooked!”

As patient care manager at Hospice Hawaii-Lanai, Melissa wears many hats. Running a hospice program doesn’t just mean caring for patients — although she does a lot of that. Her other duties include managing cases, meeting with families, supervising staff and coordinating volunteers, scheduling and training, arranging off-island medication, equipment and supplies, and working on community outreach. Earlier this year, she also earned her National Hospice and Palliative Nurse certification. Melissa also volunteers as board secretary for the Lanai Community Hospital Auxiliary and is a charter member of the newly formed Rotary Club of Lanai.

Melissa’s hard work will be recognized at a celebratory dinner and awards ceremony at Koolau Ballrooms on Oahu on Saturday, Nov. 8. Catch her interview on Hawaii News Now Sunrise Show during the week of Nov. 9, and print articles in the Honolulu Star-Advertiser on Nov. 2 and MidWeek on Nov. 5.