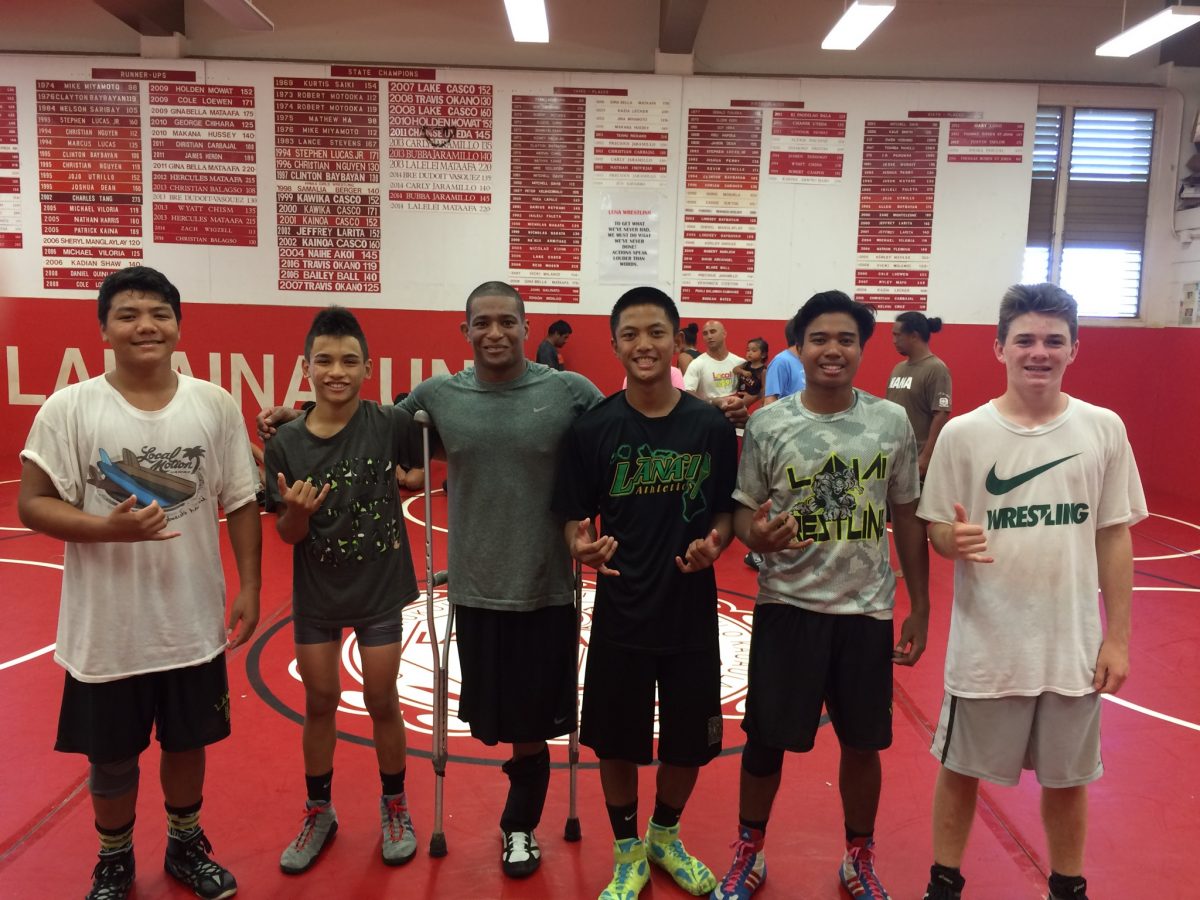 Although the high school wrestling season is only four months long, head coach Aaron Fernandez and assistant coach Clayton Ohara work with Lanai’s wrestlers year round. During the off-season the wrestling team is cross training at the beach, doing circuit workouts in Fernandez’ garage, or fundraising for off-island tournaments and camps. The vigorous workout regime and enthusiastic fundraising help the students reach goals Fernandez has set for the team, on and off the mat.

This year, the LHES wrestling team had a successful season. The team competed at the Maui Interscholastic League (MIL) Championship, and four traveled to the 2016 Chevron Wrestling Championships on Oahu in February. Junior Demytri Demeg brought home a men’s MIL title, the first in two years and only the third in LHES history.

At the MIL tournament, the Lanai wrestling team had a strong showing. Demytri Demeg won his weight class at 132 pounds, and sophomore Jake Ballesteros , was a runner-up in the 138-pound weight class. Sophomore Adriana Sanchez took third place in the 97-pound division.

“The MIL Championship was an exciting day for everyone, especially Demytri,” beams Fernandez. “Demytri had never placed in the MIL before, but he worked hard this past summer and it paid off. In the first round he was losing – I think he was battling a lot of nerves – but then he dominated the next two rounds to earn a score of 12 to 4.”

Demytri knew he could score against his opponent from Baldwin High School because he had put in so much work over the summer. “I needed that win, it had to pay off,” says Demytri. “In the end I scored some points on the other guy for taking him down on his back and I felt very proud of myself.”

The following week, the four wrestlers went on to compete at the state tournament held at the Blaisdell Center in Honolulu. Demytri, third seed in his weight class, started the tournament out strong but fell short when he competed against the returning state finalist in his quarterfinal match. “He made it to the second day of the tournament and was only one win away from placing,” says Ferandez.

Jake and Adriana made their second trip to the state tournament, where they had close matches. Jake lost to a Kamehameha student, and won against an opponent from Radford before losing to a wrestler from Iolani on the first day. Fernandez deemed all of Jake’s matches close. Freshman Hailey, who qualified for the state tournament as an alternate, held her own in the first match but did not move on to the quarterfinals.

All four wrestlers will be returning to the team next year and have the experience of wrestling at the state tournament to inspire them.

Making the most of post-season, Fernandez is working with his team to fundraise for the wrestling camp the athletes attend in San Diego every summer. The team’s fundraising efforts also fund entry into local clinics and the purchase of new wrestling equipment. “I helped coordinate the Kimie Miner concert coming up on March 18, and you can expect lots of other fundraising activities by the Pineapple Wrestling Club during the summer,” says Fernandez.

Fernandez also takes this “down” time to help his athletes focus on their studies and prepare for college. “I require all my juniors take the ACT or the SAT,” he explains. Fernandez also brings in elite college wrestlers during the off-season to workout with the team on Lanai. He hopes that meeting these collegiate athletes will show his team that wrestling can pave the way to higher education.

The LHES wrestling team has grown to become a dynamic foundation of support for the athletes, during and beyond the competitive wrestling season. Demytri is already looking forward to the 2017 high school season, and encourages other students to join the wrestling team. “When you compete as a wrestler, it’s all on you,” says the athlete. “Wrestling trains your body, but also builds a strong mind for learning at school too.”