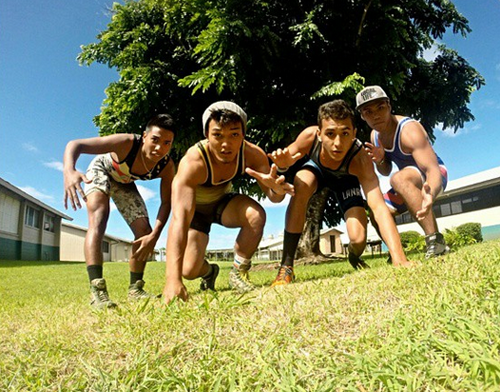 After months of grueling training and conditioning, the nine members of the Lanai Wrestling Team put it all on the line in back-to-back weekend tournaments on Maui and Oahu, closing out the 2014–2015 season with a strong finish. These tough competitors showed their true champion spirit when it came to putting on an exciting match for spectators.

A Strong Showing at MIL

In the end, all three had strong showings, with each finishing second in his weight class. Additionally, senior Chavis Cabanting placed third in the 160-pound division. On the girls team, freshmen Adriana Sanches (97 pounds) and India Del Rosario (105 pounds) placed third and fourth in their respective divisions.

“I’m so proud of our team. It was a big learning experience for everyone, including the coaches,” said Aaron Fernandez, who is in his second year of coaching at LHES, with assistant coaches Tommy Vierra and Clayton Nohara by his side. “There are no divisions in Hawaii high school wrestling, so to compete the way they did against the biggest schools in the state was truly an accomplishment.

“I hope with their results this year that they will inspire more kids on Lanai to come out for wrestling. It’s a great opportunity for them to pursue post-high school education.”

Nail-Biting Matches at the State Tournament

After placing in the MIL, runners-up Ballesteros, Del Rosario and Debrum flew to Honolulu the following weekend, March 6–7, for the Chevron/Hawaii High School Athletic Association Wrestling Championships at Blaisdell Arena.

Del Rosario’s quarterfinal triple-overtime match had audience members on the edge of their seats, but he was unable to defeat his opponent from Kamehameha School’s Kapalama campus.

Debrum was also edged out in the quarterfinal, but advanced through sudden death overtime in his next match to the consolation quarterfinals. There, he beat a competitor from Kaiser High School and placed sixth overall in the state championships.

Next, many of the wrestlers will head to San Diego for the Camp of Champions in June, where they’ll train with high-level clinicians.

“They’ll be working hard and will compete in about 30 matches each — that’s the equivalent of an entire season, all in one week,” said Fernandez. “But it will be a great opportunity for them to grow their skillset and get more matches under their belt.”