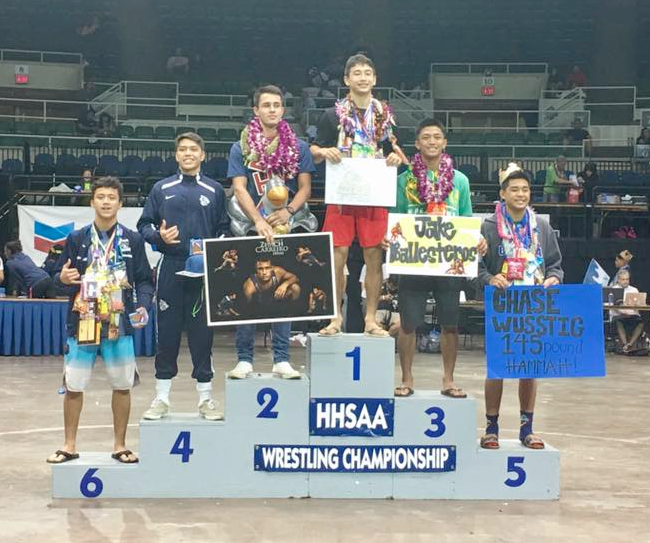 What’s the secret to the team’s success? According to Coach Aaron Fernandez, it’s hard work and mental preparation. But skill and confidence were not earned overnight.

Coach Fernandez took over the program four years ago, and he saw athletes weren’t always competing with confidence. He noticed wrestlers were intimidated by a school’s reputation rather than the opponent they faced on the mat.

“I’d see these kids go out there and have self-doubt because they were wrestling someone from a bigger school or a bigger wrestling program,” explained Coach Fernandez. “But it’s not about the size of the school. It’s important for athletes to understand that it’s about the individual wrestler.”

To mentally prepare throughout the season, the team meditates before each practice. In addition, at the beginning of the season each wrestler sets short- and long-term goals. However, Coach Fernandez emphasizes that the athletes’ mental toughness builds on physical preparedness.

The LHES wrestling team has weight lifting practice at 6 a.m. every weekday. They also have grueling workouts after school where they practice and drill wrestling technique.

“It’s nothing fancy or special,” Coach Fernandez said. “It’s about drilling simple moves until its instinctive.”

For three Pine Lads, years of physical and mental preparation led them to victory at the MIL Championships at Maui High School on February 11.

Demytri Dameg, a senior, was the first from his team to wrestle in the championship rounds. That night he became a two-time MIL champion when he edged out an opponent from Molokai High School.

Jake Ballesteros, a junior, wrestled next. He placed second at the MIL tournament in his freshman and sophomore years, but wrestled 12 pounds under his usual weight class this season. Ballesteros continued the momentum from Dameg’s win and claimed his first MIL title.

Junior Sam Dunwell was the last from the team to wrestle in the championship rounds, and his was a hard-won victory. In his freshman year, Dunwell won just one match all season. The next year his record improved but he narrowly missed a third-place win at MILs and the chance to wrestle at the state championships. However, hard work and perseverance resulted in a win and title of MIL champion in his third year.

The three MIL titles are unprecedented because LHES wrestling has never had more than one champion in a single season.

According to Ballesteros, making history for the school is a success that’s best shared with the team, “It was amazing to become MIL champ, but it was an even better feeling to share it with my teammates Sam and Demytri.”

Competing at the State Championships

Ballesteros, Dameg and Dunwell went on to compete at the Wrestling State Championships a week later – as did Emma Debrum who had a third place win at MIL and was called in as an alternate.

After two hard fought matches, Dameg was unable to continue at the state tournament due to an injury. Debrum and Dunwell wrestled well but ultimately lost in early rounds.

Ballesteros lost his first match, but came roaring back and won five straight matches to take home the bronze medal in the state tournament.

When asked about his road to the podium, Ballesteros humbly acknowledged those who had put in the hard work and practiced with him all season.

“I couldn’t do it without my team and coaches. They pushed me to do my best,” said Ballesteros.

What’s next for Lanai Wrestling?

Only a couple of weeks after the State Wrestling Championship, training for the next season has already begun.

“I wanted to take a longer break but the kids called me and wanted to get back to working out,” Coach Fernandez said with a laugh.

Off-season training will continue through the club program Pineapple Wrestling. Through the club, Lanai wrestlers will participate in an upcoming Oahu clinic led by Kyle Snyder, the youngest Olympic gold medalist, as well as the youngest World Champion in American wrestling history. This summer the athletes will have an opportunity to compete in the Western Regionals tournament in Pocatello, ID.

Coach Fernandez believes that training throughout the year will set the team up for continued success next season.

“Each team member has set the goal of winning a state title next season and I believe it can happen. Now when Lanai wrestlers go out there they think ‘I just got to wrestle’ and they know they can compete against the best.”