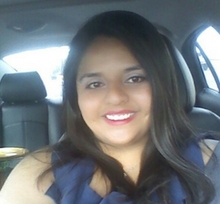 Erica Lujan moved to Lanai from Texas to teach at Lanai High and Elementary School.

Erica Lujan has always loved taking risks and trying new things, so when she was researching open teaching positions in different states across the U.S., she seized the opportunity to move to Lanai and become part of a new community.

A Texas native who grew up surrounded by vast plains and rolling hills, Ms. Lujan is thrilled to be living near the ocean. “I have always loved the ocean and that is what initially inspired me to move to Lanai over any other location,” says Lujan. “I absolutely love swimming and being at the beach.”

Lujan moved to Lanai the same week school began, but already feels the welcomed by her students’ families. “I sent out an invitation for parents to join an online parent communication system and several of them responded immediately with gratitude and excitement,” says Lujan. “I appreciate the parent involvement at such an early stage.”

So far Lujan has learned that it is essential to plan ahead, due to the relative isolation of Lanai City. “We are in a rural location and can’t just go to Walmart anytime we need something in the classroom,” notes Lujan. “It’s a different way of living, but I’m ready!”