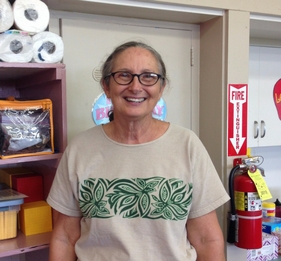 Second grade teacher Carol Ah Toong loves LHES and Lanai. Her teaching career and appreciation for the island have come full circle as she returns to Lanai to teach after residing on Oahu for several years.

Ms. Ah Toong first came to Lanai in the 70s to help a friend move her parents back to Lanai from Louisiana. She wound up with a summer job picking pineapples and it was there that she met her husband. Ms. Ah Toong began teaching at LHES in 1999, where she taught second grade in the same classroom she has this year!

Ms. Ah Toong was living on Oahu before making the decision to move to Lanai to teach. She is happy to be back on Lanai full time, but will commute to Oahu occasionally as well.

She loves LHES and Lanai. She established her roots here 40 years ago and has finally come here to stay. Some of her best friends are still living on Lanai and she is elated to be close to them again.

Growing and tending to orchids is one of Ms. Ah Toong’s favorite pastimes, and she has advanced her orchid cultivation skills over the years. When she lived on Oahu, Ms. Ah Toong volunteered regularly at Waimanalo Nursery where she tended to orchids, among other flora. Ask her to show you a photo of her prized “petal babies,” Ms. Ah Toong has many!

Ms. Ah Toong has a unique perspective on the island because she was here during the plantation days and picked pineapples for work. The island has experienced several transitions but the strong sense of community and belonging remains.