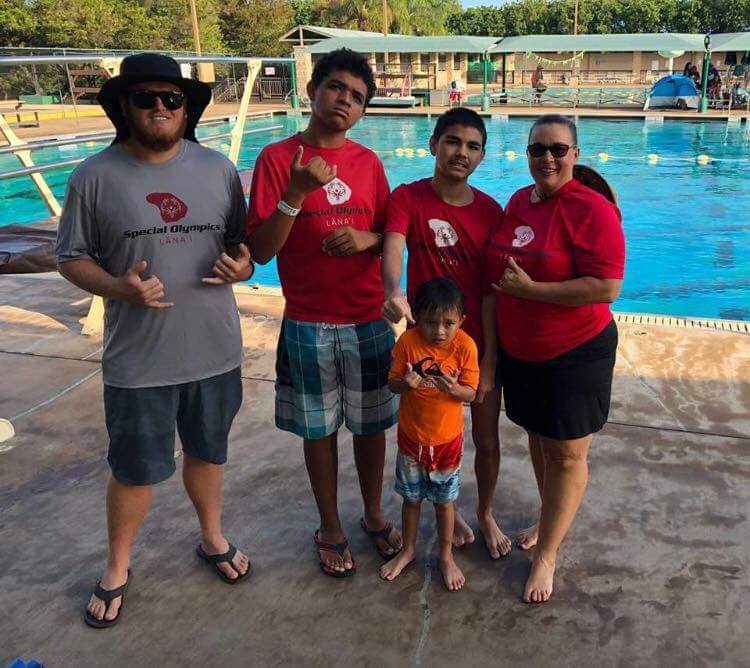 A very special group of Lanai athletes traveled to Maui to participate in their first competition this past March.

Special Olympics Hawaii brings together hundreds of Hawaii athletes with intellectual disabilities to train and compete in individual and team sports such as softball, swimming, powerlifting and track and field. Qualifying athletes go on to participate in a three-day Summer Games competition on Oahu in June.

The joy of competing

It was a day of firsts for the Lanai athletes, who had never competed in a meet before.

“I didn’t want to get them too nervous, as this was a new experience for all of us, so we just relaxed and got in the zone until we were up,” explained Patterson.

When it was their turn, the athletes swam their hearts out in the 25-yard freestyle, backstroke and breaststroke. Despite never having competed before, they were able to break their previous records set during training.

“I remember one swimmer, Thor, was just so happy to be in the water that he was actually laughing the whole time he was racing,” said Patterson. “It really brought a smile to everyone’s face to see someone that excited to be competing.”

The dual meet marks Patterson’s first time coaching the Special Olympics athletes, but he comes from a water-loving family. He lifeguards at Lanai Community pool and his mother coaches the Lanai swim team.

An athlete’s mother recruited Patterson to lead the team. He spent weeks mentoring and coaching his team and seeing his athletes perform was a rewarding experience.

“Lanai did very well, but more importantly, they had a great time,” he said. “There is no stronger feeling than seeing pure joy on a child’s face.”

Next, our Lanai athletes will head to Oahu to compete in the state finals in May. Wish them luck!