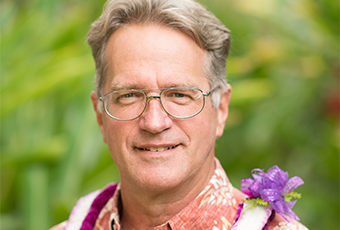 The Hawaii Community Foundation named Lanai’s own Kepa Maly of the Lanai Culture & Heritage Center as one of four recipients of the Hookele award last month.

The unique Hookele Award aims to recognize and celebrate the sacrifices and achievements from the best in the nonprofit business. Named for the hookele, or steersman, the award honors those who guide the valuable work being done by nonprofits statewide. This is the first time the Hookele has been awarded to someone on Lanai.

A program 30 years in the making

Maly’s guidance has enabled the Lanai Culture & Heritage Center to flourish from a small grassroots initiative of community members to its current success today. Since 2006, the organization has shared stories, led tours and engaged with more than 100,000 visitors—a staggering number for an island of 3,000 residents.

“The Lanai Culture & Heritage Center began because the people of Lanai wanted to ensure their history, stories and traditions of place were passed down through generations,” said Maly. “There is inherent value in our history, but if we do not collect, preserve, protect and perpetuate the knowledge we have, no one else will.”

The idea for the center was first conceived as early as the 1970s by several families, but it wasn’t until 2005 that residents reached out to Maly and his wife, Onaona Pomroy-Maly. Both were prominent Hawaiian ethnographers with ties to Lanai. Maly decided it was time to return home to where he was raised and start the work of building a heritage program more than 30 years in the making.

Still, it took time to develop the program and find a piece of land to call home. In 2007, the Lanai Culture & Heritage Center was officially formed, and community members stepped forward to donate, offer support, or simply express interest in the history of the island.

Now, the center provides a place for residents and visitors to learn about the unique history of Lanai — from ancient Hawaii through its plantation-era days.

“Put simply, the center is all about engaging the community and telling its stories. That’s where it all starts,” Maly explained. “If they are unaware of the history behind Lanai’s most storied places, how can they appreciate the uniqueness of our island and people? Once awareness is built, then we can engage in stewardship, and our work is made that much richer.”

Maly is equally enthusiastic about sharing Lanai’s unique culture with guests. “Lanai isn’t for everybody. When visitors come here, they have already wandered off the beaten path,” he said. “We want to welcome them and teach them our stories so they can understand that they are in a special place.”

Soon, visitors and residents alike will have the opportunity to experience Lanai as it has never been seen before. The center is developing a GPS web-enabled app that will provide historic photos, audio narrative, aerial videos and augmented reality technology for Lanai’s historically significant places.

“This app will introduce new experiences in learning and engaging with the land in a completely unique way,” said Maly.

Sit back, relax and celebrate

In the 10 years since the center first appeared on Maly’s radar, it’s clear much has changed under his guidance. The innovative GPS app is just one in a long line of initiatives to engage, educate and preserve the culture of Lanai, piquing the interest of the Hookele nomination committee.

“It’s humbling to be recognized, but important to note that this award is really about the legacy of our community and the importance of our culture,” said Maly.

The award has one unique caveat to winning. Maly and the other recipients are bound by the award guidelines to sit back, relax and enjoy the $10,000 cash prize, which must be used for their own personal renewal or development.

Maly plans to take a trip with his wife to the national archives in Washington D.C. They’ll spend their time like true ethnographers, studying the historical photos and records from old Lanai.