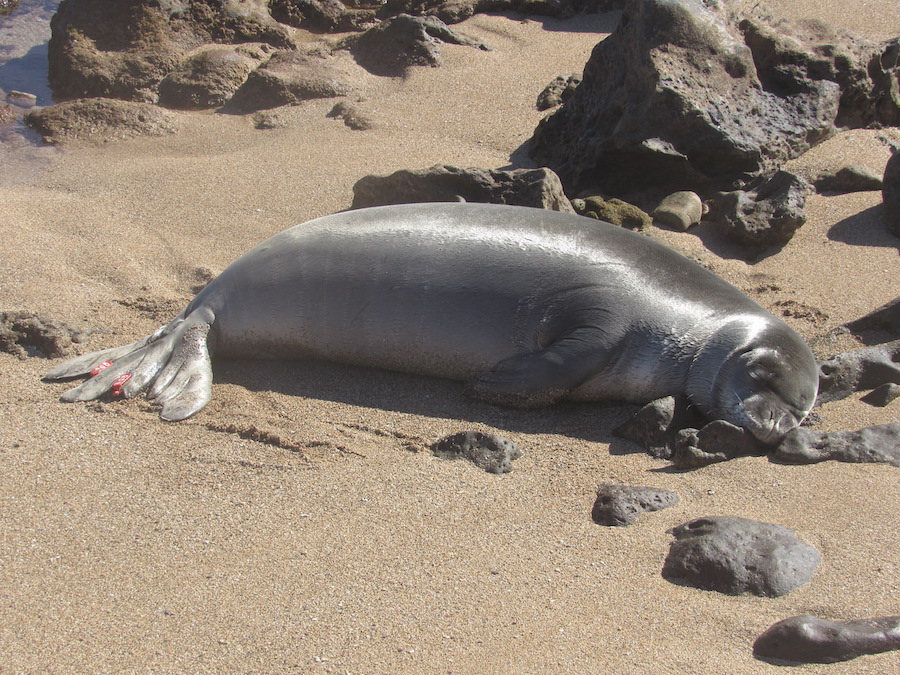 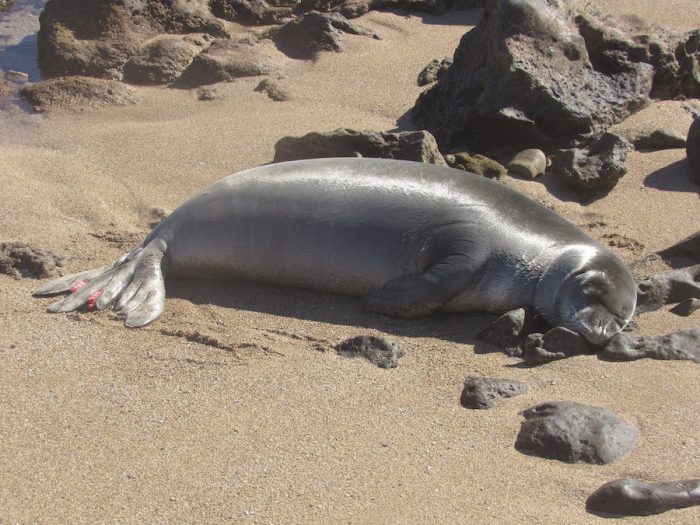 In June, Lanai welcomed a Hawaiian monk seal pup with a storied lineage whose significance extends to the biologists who tagged it. Given the unique ID RQ88 by NOAA Fisheries, the female pup is the first offspring born to 4 ½ year-old Imikai, who was the first Hawaiian monk seal ever to be tagged on Lanai. Imikai herself comes from a very famous family. Imikai’s mother is a Hawaiian monk seal known to make frequent trips between Kauai and Lanai. And Imikai’s grandmother is Rocky, the well-known monk seal who recently gave birth to her 14th pup in front of Sans Souci Beach in Waikiki. That makes Lanai’s youngest pup, RQ88, Rocky’s great-grand-pup.

Hawaiian monk seal pups usually stay with their mothers for five to seven weeks, during which time they feed and become healthy enough to wean and live independently. Shortly after a monk seal pup weans, tags with its alphanumeric identifiers are attached to each flipper and it is also given a chip similar to a dog or cat microchip – this pup now has red tags engraved with Q88 and Q89. These small tags allow monk seals to be identified by scientists and community members as the seals travel throughout the island chain.

“Once we understand where these monk seals are, we can understand the threats to this species, which is one of the most endangered marine mammals in the world,” said Dr. Rachel Sprague, co-director of conservation at Pulama Lanai. “By monitoring individuals in the population over time, we can tell whether the population is stable, increasing or decreasing.”

Dr. Sprague and her team of biologists partnered with NOAA Fisheries to tag RQ88. Two of the biologists, Grazel Caceres and Jake Ballesteros, are from Lanai, making them the first Lanai-grown biologists to tag a Lanai-born Hawaiian monk seal.

“I’ve monitored Imikai weekly over the past few years, ensuring she was ok,” explained Grazel. “And now to have witnessed her with a pup of her own is very special. Being the first Lanai-grown biologist to tag a monk seal pup on Lanai brings a lot of meaning to the work I do and who I do it for. It’s really for the future generations of Lanai to see.”

“I personally think it was a very cool experience,” said Jake. “I never thought it was something I’d ever have to do when I signed up for this job, but I’m glad I was given the opportunity.”

For Dr. Sprague, seeing her team of Lanai biologists gain new experiences has special meaning. “It means a lot to me that I can train and help grow biologists who were born or grew up here on Lanai to ideally take over and be the ones to protect species on Lanai,” she said. “It would make me so happy when I retire or am ready to move on that someone who grew up here could be leading this work.”

With nearly 400 known Hawaiian monk seals living across the main Hawaiian Islands, it’s important to monitor each one and tag pups as they wean from their mothers. “Learning about Hawaiian monk seals and monitoring them is a partnership with NOAA Fisheries and The Marine Mammal Center who record monk seal sightings from Lanai and Maui, and combine those with sighting data from around the state,” said Dr. Sprague. “And the community has a huge role to play in this as well because that’s where a lot of sightings come from.”

Community members who see Hawaiian monk seals on beaches of Lanai are encouraged to keep a safe distance of at least 50 feet or 150 feet for mothers with pups. If possible, use a zoom camera to capture the seal’s flipper tag and report sightings to The Marine Mammal Center’s Maui/Lanai Hotline at (808) 292-1272 (or the statewide hotline at (888) 256-9040).

“Being able to tag a pup right after it weans from its mom is really important because you then know who the mom is, how old that seal is, and in some cases, it demonstrates the impact a seal like Rocky has on the overall monk seal population in the Hawaiian Islands,” said Dr. Sprague. “This shows the impact of just one seal. And all of that comes from attaching flipper tags to the pups and having community members call in sightings.”