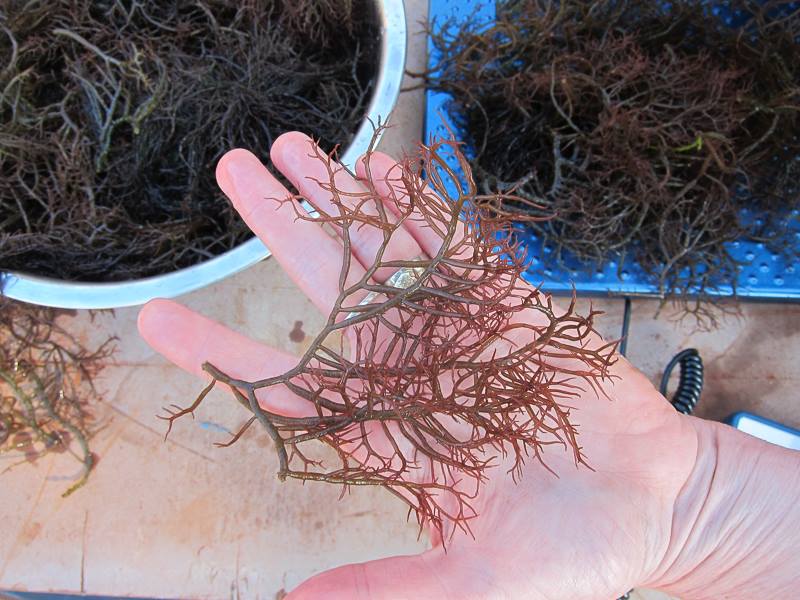 Kupuna may remember a time when the Maunalei shoreline flourished with limu, an edible seaweed. But over the years, runoff from streams brought a fine-grained soil called silt to the ocean. The silt caused an unsuitable floor, making it difficult for limu to attach and grow.

Working with the nonprofit Kuaaina Ulu Auamo (KUA), volunteers from the Lanai Limu Restoration Project (LLRP) are working to restore Maunalei’s bounty. Using cages to protect the limu from being prematurely eaten by turtles or fish, Cheryl Kaiaokamalie and groups of volunteers wade in the water to cultivate a specific type of limu called ogo. Ogo, also known as limu manauea, is the red seaweed commonly used to garnish poke. In addition to providing sustenance for people, fish and turtles, this nutrient-rich plant is used for medicine.

Growing ogo in cages helps the plant to mature and produce spores to be carried away by the current. Kaiaokamalie says that limu can also be grown on land — an Oahu group was successful in cultivating limu in tanks. The LLRP farm wants to expand its operation to include land growth; however, since there is no running water or electricity to the area, it’s a bit more challenging. Kaiaokamalie remains hopeful that their efforts will help to revitalize the plant. “We have the supplies, tanks, and access to ocean water with the support of regular volunteers, we can expand the growth to land.”

For Kaiaokamalie and her sister, Dale Phillips, working on limu restoration is a way to continue their late father’s passion project. Allen Kaiaokamalie spent most of his life dedicated to preservation and to teaching the next generation about being stewards of the land. In his yard, he started growing limu in a 55-gallon barrel and would trek to and from Kaumalapau to bring ocean water to the tank. In 2012, he started the Lanai Limu Restoration Project and linked up with KUA.

“He was really excited about having a limu farm at Maunalei,” said Kaiaokamalie. “He realized that through the KUA group, there were other people out there trying to do the same thing he was doing.”

Continuing their father’s efforts, Kaiaokamalie and Phillips organize community work days and try to involve keiki in the farm’s growth. “After my dad passed away, my sister and I said, we must keep it going. We can’t stop now,” said Kaiaokamalie.

A workshop held in May was attended by 47 kids who spent the day helping and learning about the farm. Kaiaokamalie says that the project also teaches children how to observe the seaweed’s growth, how to tie hooks and how to live off the land. “We want to teach the keiki that you don’t have to go to the store for everything. You can grow food, including limu, in your yard,” Kaiaokamalie explained.

The disappearing limu is not a problem that is unique to Lanai. Groups on every island are trying to kickstart the growth of limu and have been collaborating with each other. There is an active Limu Hui Facebook page with almost 1000 followers that provides a place for all the islands to share their efforts to regrow the once abundant species.

Since the project began, people have been reporting new limu sightings to Kaiaokamalie. She says the revitalization of limu can only continue with the help of dedicated volunteers. The whole community is welcome to participate, and even visitors to Lanai are invited to learn about the farm. “Volunteers will gain knowledge and having a place to go with an atmosphere of friends and family. Everyone’s welcome. If the gate is open, come on in.”

For more information visit the Lanai Limu Restoration Project Facebook page or check out http://kuahawaii.org/category/limu-hui/. Or if you are interested in trying pickled limu, Kaiaokamalie will be distributing samples at this year’s Queen Liliuokalani Birthday Celebration in September.