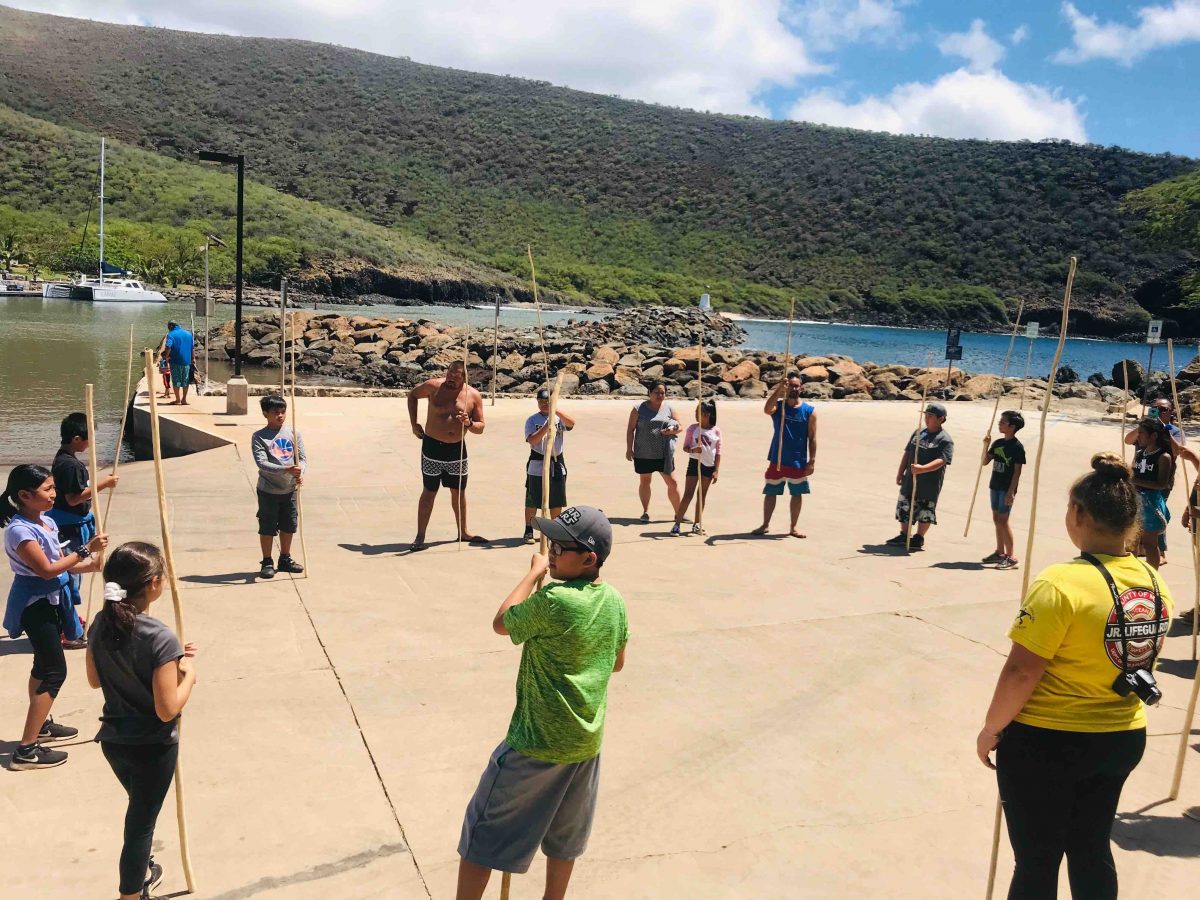 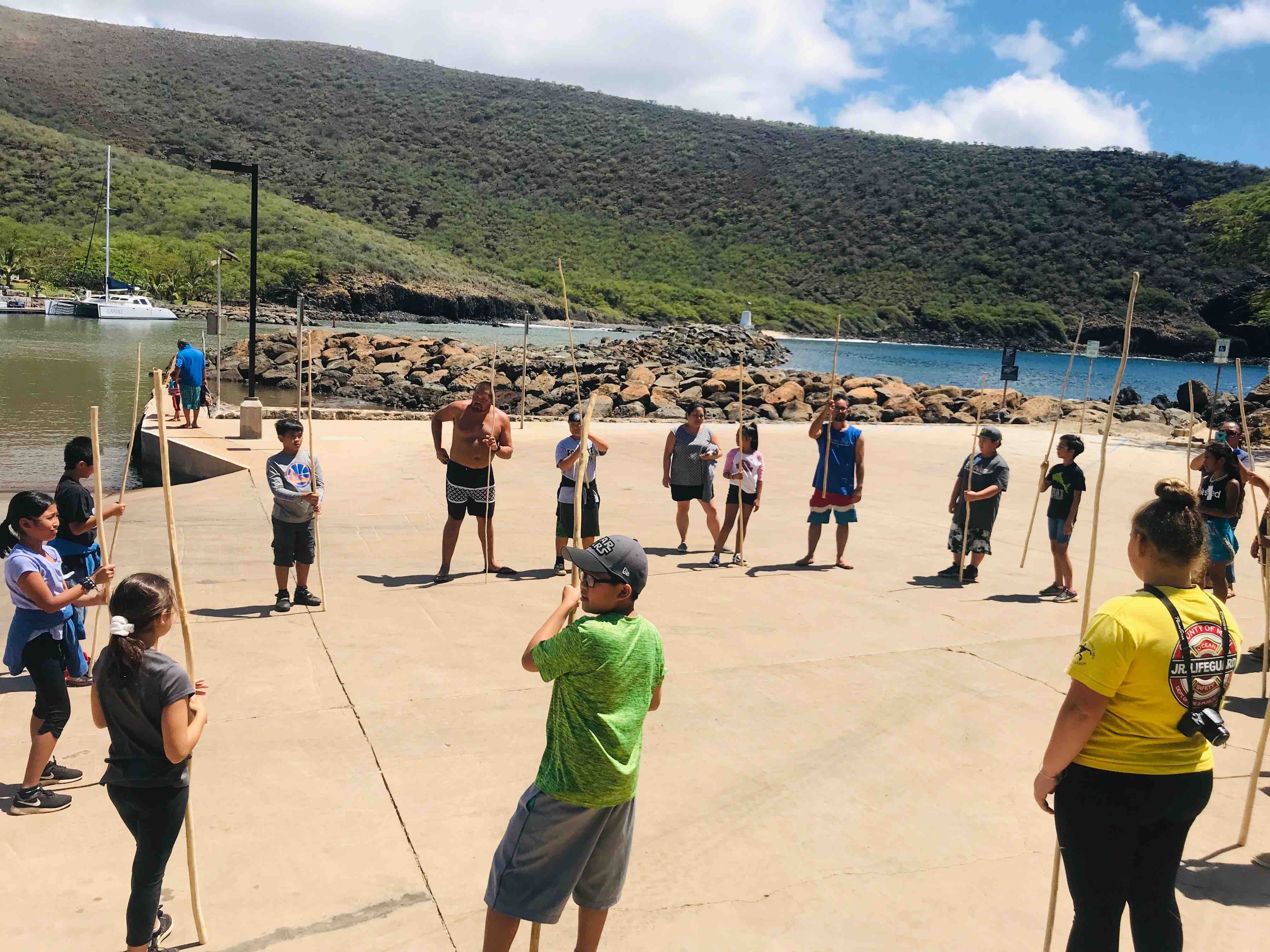 LHES Hawaiian studies coordinator Simon Tajiri vividly remembers the sound of oli and pu welcoming Hokulea and sister canoe Hikianalia into misty Manele Bay in 2013. From there, the voyaging canoe embarked on its worldwide voyage, sailing over 40,000 nautical miles in 3 years, traveling to 23 countries and more than 150 ports to engage communities across the world in Polynesian wayfinding culture and environmental sustainability. The voyage was named Malama Honua — “to care for our island earth.”

To close the circle on a remarkable worldwide journey, the Hokulea crew returned to Lanai from April 29 through May 4 to greet residents and share stories from their journey. Working with Mariah Hugho, volunteer coordinator for the Polynesian Voyaging Society, and Kolomona Kahoohalahala, Hokulea’s first voyager from Lanai, Tajiri helped to coordinate the vessel’s homecoming to the island. The week’s events were centered around connecting students from LHES with Hokulea and its crew.

Inspiring the next generation

Tajiri says the visits to Lanai were significant for the community, especially for the younger generation. “We are one island, one people. Even though we come from various backgrounds, we all depend on the land to survive and we all have to contribute to the health of Lanai. Hokulea’s journey represents stewardship and the responsibility that we have to our home.”

With the help of Maui Economic Opportunity, which provided buses to transport students to and from the dock, LHES students of all ages were able to step outside the classroom and onto the Hokulea to get a glimpse of the day-to-day life of the voyagers. “We were trying to share with them that this is not just a Hawaiian thing,” explained Tajiri. “Voyaging and this legacy is part of everyone’s history. All of our ancestors were voyagers at some point.”

Whenever Hokulea rests on Lanai, Tajiri noted that it is the island’s kuleana to watch over her. Younger community members helped to monitor the anchor and tide, and some even got a chance to ride on board. Charlin Milinanea Clarabal, Cheleigh Clarabal and Ikaika Gamulo accompanied Hokulea back to Oahu, deepening their connection to the vessel.

“He waa he moku, he moku he waa. The island is a canoe, the canoe is an island. This Hawaiian proverb is not only speaking about the canoe itself or the island itself, but the relationship that the canoe and island need, just like how our kids need the whole island to support their growth to reach their destination,” said Tajiri.

The Polynesian Voyaging Society, the nonprofit responsible for arranging Hokulea’s voyages, now has plans to send a crew to circumnavigate the Pacific Ocean as early as 2021.

Another double-hulled canoe based on Hawaii Island, Makalii, is sailing this month to Papahanaumokuakea, the Northwestern Hawaiian Islands. This expedition will be the first in modern times to use only food that was grown, harvested and prepared in Hawaii onboard throughout the entire journey. While the voyage is centered around self-sustainability, it is also a chance to train a new group of young leaders.

“With all these environmental uncertainties, we don’t know what the world will look like 50 years from now,” Tajiri said. “We really have to prepare our kids to navigate anything. What I hope for is a united Lanai to support our children to voyage into the future.”