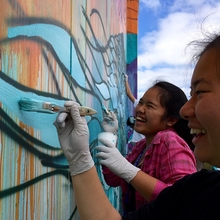 More than 3,000 square feet of plain white wall behind the LHES Pedro Dela Cruz Gym became the perfect canvas for a larger-than-life mural celebrating Lanai’s culture and history, while honoring the legacy of a beloved educator, artist and grandmother.

It took months of planning, strong partnerships, the support of the community — and Mother Nature — to plan and execute a project of this magnitude. “The mural was an act of faith,” the project’s creator said. “Even with setbacks, the community really came together to create something special.”

The inspiration for the mural came in October of last year as a way to honor the late Helen Fujie, a longtime LHES schoolteacher and supporter of arts on Lanai. Helen’s granddaughter, Michelle Fujie, was searching for an opportunity for her senior class to leave their own legacy behind at LHES. A mural seemed like the perfect way to do both.

Fujie found John “Prime” Hina and his team at 808 Urban, a Honolulu nonprofit known for its large-scale mural designs deeply rooted in Hawaiian culture. “For Prime, it wasn’t just about the act of painting, it was about experiencing culture and teaching the students about culture. Their approach to creating murals is an expression of native culture in an urban setting,” explained Fujie. “The partnership with 808 Urban was a natural one because we felt the same way about the project.”

From there, Fujie reached out to Lanai Culture & Heritage Center, another major partner, which supported a portion of the project through the Native Hawaiian cultural literacy grant. LCHC also took LHES students to the island’s storied places to teach them about the myths and culture of ancient Lanai that would be included as themes for the mural design.

“They wanted to put every single Lanai story on the wall,” said Simon Tajiri, program director at LCHC. “We went to Prime with the students’ ideas, and he developed repeating motifs to bring everything together. We also turned to Uncle Wendell Kaho‘ohalahala to help us tell this visual story.”

Kaho‘ohalahala, a noted artist on Lanai who has his work displayed in Four Seasons Manele Bay, is a student of the late Helen Fujie, which gives special meaning to the mural’s final design. “My grandma was so proud of Uncle Wendell. She would talk about how one of her students had his art in luxury hotels,” said Fujie. In the true spirit of Helen’s Fujie’s legacy, Kaho‘ohalahala designed the mural to have “something for everyone,” with seven segmented “rays” representing Lanai’s living environment, ancient stories and diverse community.

Many hands working together

With the design complete and a plan in place, painting was set to commence Jan. 5 through 10. 808 Urban arrived on Lanai on Jan. 2 to prepare the wall for painting and start on the top portion of the mural, but a last-minute storm blew in, delaying supplies from arriving on island. “We went to a local store and bought house paint and they did what they could for the initial wash,” said Fujie. “When supplies did arrive, we had only three days left to finish a 3,000-square-foot mural. Prime and his team worked around the clock and camped out in my classroom. They were painting up until the very last minute of the unveiling.”

“It was a huge effort with more than 100 students, parents and members of the community coming to paint, bring food for volunteers, and just watch the process,” said Tajiri. “The 808 Urban team loved the home-cooked meals that were donated by many different families. It was really special to see them get to experience the Lanai we know.”

“What began as a way to honor my grandma quickly grew into a project for the entire community,” Fujie said. “We pulled it together with the generosity and support of 808 Urban, which took on the project pro bono, as well as the people of Lanai who donated supplies, meals, time and services. Together, we transformed something ordinary into something beautiful that was touched by so many, and that stands for past, present and future generations of Lanai.”

Fujie and Tajiri celebrated the mural’s unveiling on Jan. 10 along with more than 200 supporters from the community. The final brush strokes were put into place the following day, and the LHES students performed their first piko of 2015, “Kukilakila o Lanai i ka Lai,” honoring the island’s history in front of the freshly painted mural on Jan. 12. Since then, the mural has spawned several smaller projects, as well as the establishment of a Lanai Junior Board, a concept started by 808 Urban to encourage youth to plan and provide public artwork.

“The mural became a doorway to a creative space to empower the Lanai voice,” said Tajiri. “We want to say mahalo to everyone for making it happen.”