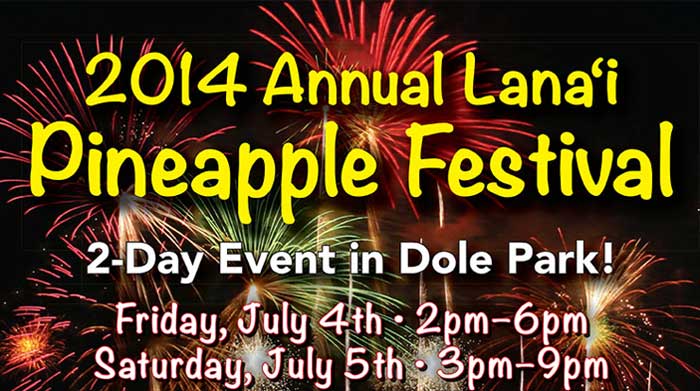 The annual Lanai Pineapple Festival is one of the most anticipated events of the year. And why wouldn’t it be? It offers the perfect combination of food, fun, entertainment, and opportunities to meet friends both old and new.

What to Expect at the Pineapple Festival in 2014

The 2014 version of the festival promises to be bigger and better than ever. This year, the festival runs two days – on Friday, July 4, and Saturday, July 5 — with most of the excitement happening on Saturday.

This year, a fireworks show will once again culminate the event. Sponsored by Pulama Lanai, the pyrotechnics are scheduled for Saturday at 9 p.m., when they’ll bring the two-day festival in Dole Park to a bombastic close.

The Independence Day holiday wouldn’t be the same without a parade. The 2014 festival parade begins its march around Dole Park Saturday at 3 p.m.

Saturday night will also feature a performance by Weldon Kekauoha, who will take the stage prior to the fireworks show. Makani Tabura will emcee the show.

As always, food is a focus of the festival. This year, Chef Adam Tabura, winner of “The Great Food Truck Race” reality TV show will host a “Chopped” cooking contest in which teams of two will compete to create the best dish using pineapple as a main ingredient.

Lanai restaurants and food vendors will be out in force on Friday and Saturday, serving Hawaiian, Filipino, Mexican, American, and other local food favorites. There will also be cotton candy, shaved ice and plenty of desserts. Wow Wow Lemonade from Maui and Petit Suisse Crepes from Oahu will also be at the festival on Saturday.

Booths will feature local crafters, non-profit groups, and companies doing business on Lanai. There will be games for kids, exhibits, and prizes that will be awarded on both days of the event.