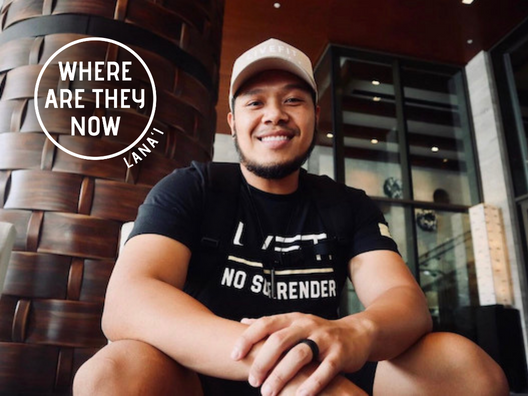 After graduating from LHES in 2010, Lorenz Valdez could not have imagined where he would be today. His current online brand as “The Hawaii Mentor,” has given Lorenz the opportunity to help improve people’s mental and physical health around the world. As a digital/social media marketer and part-time Certified Personal Trainer (CPT) on Oahu, he manages multiple social media accounts, creates vlogs, runs a blog and consults his clients on health and wellness. In addition to these functions, he also runs multiple online businesses as another source of income.

Success in an Online Career

Lorenz credits his ambition to his wife, who influenced him to become the person he is today. Initially wanting to stay close to his parents, Lorenz followed a friend to Maui in 2010 to pursue a degree in nursing before immediately realizing that career wasn’t for him. He then changed majors and graduated from the University of Hawaii Maui with an associate degree in Sustainable Construction Technology, a program that offers students hands-on training in building construction and a wide range of other specialties. After graduating with his associate degree, he started work as a spa attendant at the Andaz Maui at Wailea Resort and became a CPT in 2014 until he officially began his online entrepreneur journey in 2016.

Lorenz persevered through a tough 5 months at the beginning of entrepreneurship as he struggled to make a profit. But he continued to learn by watching YouTube videos and following the teachings of The Millionaire Mentor, a former engineer-turned-entrepreneur, with millions of online followers. His hard work paid off, and in 2017 he quit his full-time job as a spa attendant to dedicate his time to digital/social media marketing and traveling the world with his wife.

However, once the pandemic hit and all travel came to a halt, Lorenz found himself missing everyday in-person social interactions. To fill that need, he chose to return part-time to personal training at Island Club and Spa on Oahu where he managed his own schedule with clients while still dedicating much of his time to The Hawaii Mentor platforms; the best of both worlds.

“The most fulfilling part is being able to connect with people from all around the world and being able to help inspire them in their fitness and their business,” said Lorenz. “That’s why I became a trainer when I learned about nutrition. I wanted to teach others, which is how it ultimately blended in with sharing what I learned about digital marketing.”

Lorenz has managed to find success in his work and personal life as his career allows him to live his dream of traveling around the world with his wife. They recently got married in Switzerland and have traveled to other countries such as Japan, Korea, Paris, Philippines and Canada, to name a few. Aside from traveling, Lorenz also enjoys the simple luxuries of walking his dog, going to the beach, playing music and relaxing.

One of the things he misses most about Lanai is how relaxed it is, and although the last time he visited was two years ago, he is excited to visit more often.

“When you travel, it’s so wild and crazy that when you go back home [to Lanai], I can just relax,” said Lorenz. “I don’t really need to think about too much and get to enjoy being around family, friends and people that I grew up with.”

In the far-off future, although Lorenz doesn’t plan to permanently settle down on Lanai, he dreams of one day giving back to the community and making a big impact that will leave a stamp back home to inspire others to pursue their passion. “If I can do it, anyone from Lanai can!” encouraged Lorenz.

Interested in keeping updated on Lorenz? Visit his website at www.thehawaiimentor.com to find links to his social media channels.