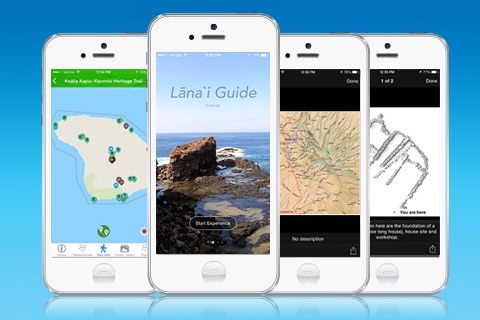 In partnership with Pulama Lanai’s Culture & Historic Preservation Department, the Lanai Culture & Heritage Center (Lanai CHC) has expanded its cultural literacy, preservation and interpretive programs with the creation of a mobile app named “Lanai Guide.” The app offers interactive place-based education that combines the qualities of a museum exhibit, classroom and field program all at the touch of your fingertip.

Using GPS technology, Lanai Guide directs users to over 100 points of interest — on the ground and in real time — with mapping and navigation tools. By using this app, you may find locations of importance on the island and receive a wealth of information about the locale. This information can be customized depending on your level of interest. For example, you may learn place names and historical dates, or find in-depth content as well as links to other resources. The app also educates users about points of interest on Lanai through:

A few of the notable points of interest featured in the app include the endemic dryland forest at Kanepuu, the Waiaopae Fishpond, ancient loi kalo in Maunalei Valley and the watershed forest of Lanai Hale. To learn more about the Waiaopae Fishpond, for instance, tap on an image to uncover an in-depth history of the fishpond and its current restoration by residents today. The description includes a quote from the native historian Samuel Kamakau, from 1860, describing the flora and fauna once found in the pond. High-resolution images and a map accompany the detailed directions to the site with hiking instructions updated in real time.

Lanai Guide was made possible by a grant from the Hawaii Tourism Authority Natural Resources Program, a branch of the Hawaii Community Foundation, in late 2014.

In partnership with Pulama Lanai and Maui-based Koa IT, the first phase of the application was built with 125 points of interest. These locations were identified through hands-on research using Hawaiian and English language cultural resources, as well as traditional knowledge gathered through storytelling and cultural practices, such as hula and land use.

In December 2015, the free app became available for both Apple and Android phones. Lanai Guide is valuable for Lanaians looking to expand knowledge of their home, and for visitors eager to learn about the island.

Currently, the app is being considered for a Preservation Award from the Historic Hawaii Foundation, and has sparked local and national interest among heritage programs hoping to develop similar programs in their communities.